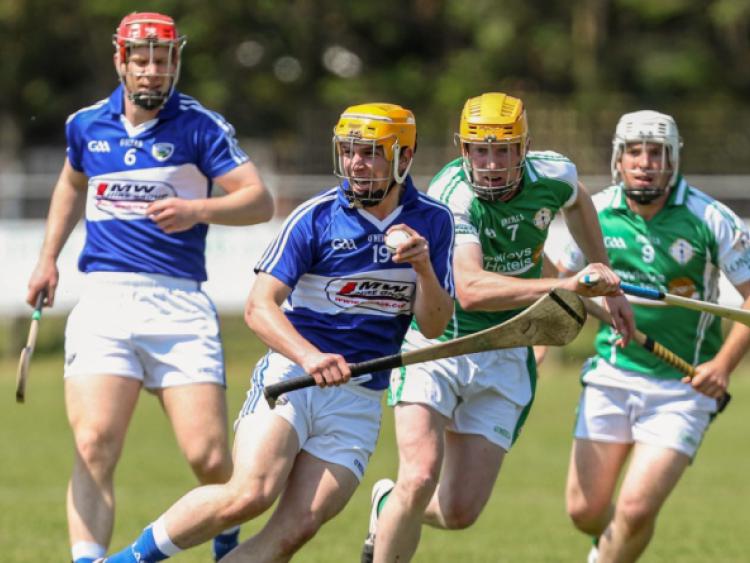 Laois secured their place in the Leinster Senior Championship quarter-final with this win in London on Sunday but not before they were given a real fright by the home side.

Laois secured their place in the Leinster Senior Championship quarter-final with this win in London on Sunday but not before they were given a real fright by the home side.

In a game played in glorious sunshine in Ruislip, Laois held a deserved half-time lead at 1-10 to 0-5 having played with the wind and they all signs pointed to a comfortable win for Cheddar Plunkett’s side.

However London came out strongly after the restart and got back to within three before John Brophy struck for what turn out to be a match winning goal for Laois. London came again and were back within three late in the game and Laois needed a brave block from a Matthew Duggan shot to maintain their advantage. London also hit a string of wides in the closing stages and in the end Laois were relieved when Fergal Horan blew the full-time whistle.

Despite their struggles in the second-half, Laois held on to secure their third win in consecutive weeks in the Leinster Round Robin Series and they now face fellow qualifiers Antrim next weekend to decide who faces Wexford and who faces Galway.

If Laois win next Sunday in O’Moore Park, they will face Wexford the following weekend in the Leinster quarter-final while a defeat would see them square off against Galway.

Laois started the game strongly and Stephen Maher opened the scoring inside the first minute of play.

Offaly native Eoin Kelly equalised for the home side soon after but the early exchanges were all Laois and they gradually built their lead over the course of the first-half.

Two points from Eoin Kelly for London were cancelled out by two more from Stephen Maher before centre-back Matthew Whelan launched over a trademark long range effort to put three between the sides midway through the half.

With the Laois defence on top and Dwayne Palmer and Patrick Whelan holding sway in midfield, Laois turned the screw and their efforts paid off.

Shortly after he had opened his own account with a point after 20 minutes, Neil Foyle struck for the opening goal. Ross King won possession for Laois from a London puck out and he played the ball to Foyle. The Borris/Kilcotton man made a bee-line for goal and drilled the ball past James Barrett to the back of the net.

Further points from John Purcell and Willie Hyland gave Laois the comfort of a ten point lead and while Eoin Kelly pulled two points back for London before the break, Laois still held a 1-10 to 0-5 lead at the break and looked well set to record their third win in as many weeks.

While they did prevail, they were holding on in the end as London mounted a remarkable comeback that, thankfully for Laois, came up just short.

Having only managed five points in the first-half, London hit that many in the opening eight minutes of the second with Eoin Kelly accounting for four of the scores. London almost struck for a goal that would have gotten them on level terms but Eoin Reilly did well to save Kelly’s effort. Laois never really settled after the restart but points from Stephen Maher and one from halfway from Matthew Whelan did briefly steady the ship.

With ace marksman Kelly once again getting London back within three, the pressure was on Laois but they responded with John Brophy finding the back of the net to give them some much needed breathing space.

That score gave Laois a six point lead with 20 minutes remaining but in that time they only added one further score and that came in injury-time from PJ Scully.

In the interim, London clawed their way back with goalkeeper James Barrett getting in on the scoring act with two frees. They were left to rue a number of wides and they only created on goal chance which was well blocked by the Laois defence.

In the nervous closing minutes, Laois held on with Scully’s late point rounding off the win.