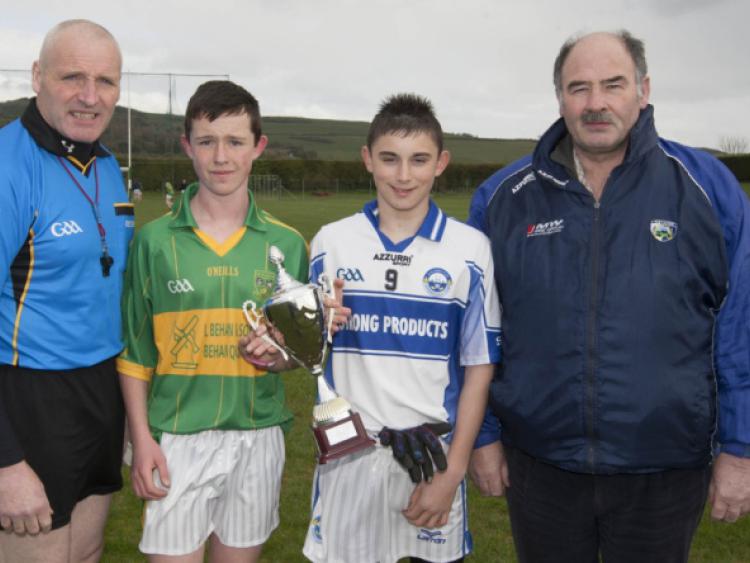 In a somewhat one-sided affair in Stradbally on Sunday evening, St Pauls’s comfortably booked their place in this year’s Feile with a comprehensive victory over a gallant Balylinan-Glenmore side.

In a somewhat one-sided affair in Stradbally on Sunday evening, St Pauls’s comfortably booked their place in this year’s Feile with a comprehensive victory over a gallant Balylinan-Glenmore side.

With just a minute on the clock, Ballylinan-Glenmore drew first blood with Ciaran Comerford slipping his man before calmly splitting the posts for the first score of the day.

St Paul’s replied in devastating fashion with Rory Doyle collecting the ball on the forty yard line before dashing straight through and rifling the ball into the roof of the net to grab what was to be the first of six goals for his side.

St Paul’s continued to heap the pressure on Ballylinan-Glenmore and with Rory Doyle pulling the strings on the full-forward line, the young attacker quickly added two points.

The Ballylinan-Glenmore goalkeeper, Aaron Baldwin, had his work cut out for him, but despite this, Baldwin made two spectacular saves before Doyle eventually grabbed his second goal in the eighth minute with the ball ricocheting off both posts before eventually crossing the line.

Padraig Kirwin and Doyle followed up with points, before Alan Kinsella got his name on the scoresheet with a goal and Rory Doyle sealed his hat-trick with a goal from a near impossible angle to close out the first half.

The second half restarted with a superb quick-fire 1-1 from Alan Kinsella to push st Paul’s even further ahead. Meanwhile, Ballylinan-Glenmore continued to contest the game with Ciaran Comerford grabbing his, and Ballylinan’s, second point of the day with three minutes gone in the second half.

St Paul’s continued to mount pressure on Ballylinan as they grabbed 1-3 in five minutes, with Elliott Scully clinching the goal. Ballylinan-Glenmore responded with with Daniel Comerford and Keynan Behan both raising the white flag.

St Paul’s closed out the game with points from Kinsella, Doyle, centre-back Niall Dunne and substitute Michael Ryan as they now prepare to represent Laois at this year’s Feile.