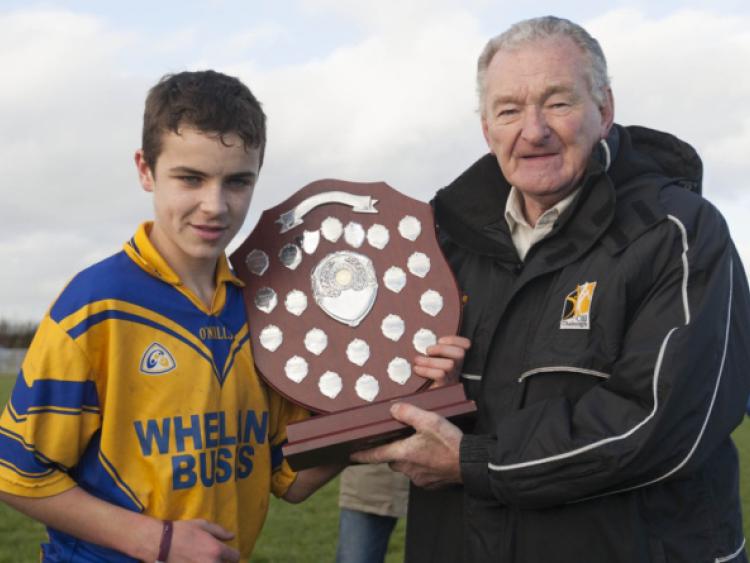 Coláiste Íosagáin claimed the South Leinster Juvenile ‘B’ title last Wednesday afternoon, as they were just too good for St Kieran’s Kilkenny in this entertaining game in Johnstown.

Coláiste Íosagáin claimed the South Leinster Juvenile ‘B’ title last Wednesday afternoon, as they were just too good for St Kieran’s Kilkenny in this entertaining game in Johnstown.

The Portarlington school were always in control of this one, as they opened up a five point lead after just 15 minutes. St Kieran’s threatened occasionally, but some impressive defending rebuffed them time and time again.

With goalkeeper Niall Gorman making a string of excellent saves, it took a late penalty from the Kilkenny school to finally put the ball in the net, but by then it was too little, too late.

Íosagáin were by far the more impressive side on the day, with Ronan Coffey and Colm Slevin pulling the strings for them. Alan Kinsella chipped in with 1-3 and wing-back Adam O’Sullivan made two vital blocks in the first half when St Kieran’s were through on goal.

The game was slow to get going, as both teams struggled on a heavy pitch. Almost seven minutes would elapse before a score was registered, and it went to Íosagáin, with Ronan Coffey tapping over the bar. Colm Slevin then set up Mark Barry for their second, and the Port school were up and running.

Coffey rounded off a nice team move for their third point, with Alan Kinsella getting his first score of the day soon after. When Oisin Murphy floated over a point in the 15th minute, there was already a five point gap between the teams.

St Kieran’s finally sprung to life after that with two good points from Conor McGree in the space of a minute, and with both teams getting another point apiece, it left the score reading 0-6 to 0-3 at half time.

The second half was dominated by Íosagáin, despite them playing into a reasonably stiff breeze, and they struck for their goal after six minutes. Ronan Coffey and Oisín Murphy set up Alan Kinsella, and he rounded the ‘keeper to fire home.

It was one-way traffic for the most part from there to the end, as Íosagáin had the vast majority of possession. They probably could have scored more, but three frees from Mark Barry and a point from Alan Kinsella meant Conor O’Keeffe’s late penalty counted for little.