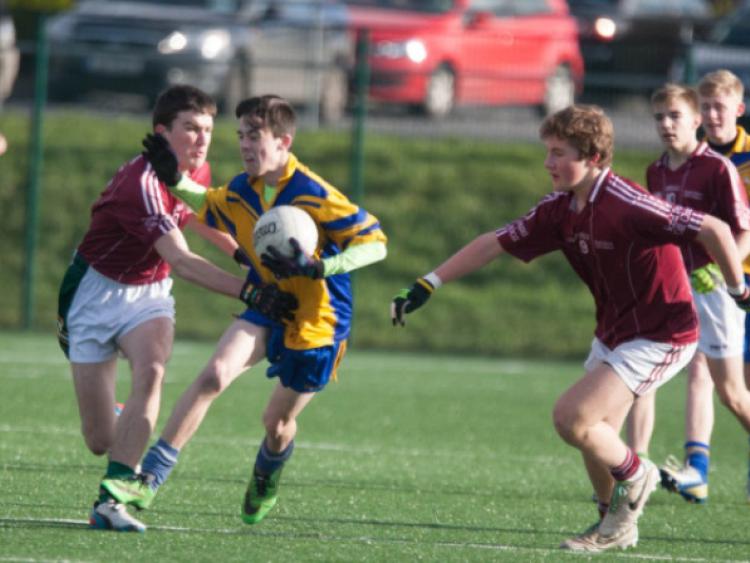 Portarlington school Colaiste Íosagáin were denied a Leinster title last Thursday afternoon, as they lost out to a late rally from Scoil Dara Kilcock.

Portarlington school Colaiste Íosagáin were denied a Leinster title last Thursday afternoon, as they lost out to a late rally from Scoil Dara Kilcock.

Having been without a match in over a month, the lack of playing time showed towards the end, as they just ran out of steam and allowed the Kildare side back into the game.

It was a brave effort all the same, and no doubt there is more to come in the years ahead from this Íosagáin team. Kilcock were slight favourites beforehand, and they lived up to that billing, thanks to a very strong spine to their team.

In the early stages, however, it was all Colaiste Íosagáin, as they raced into a commanding lead. Colin Slevin scored two wonderful points from play to get the ball rolling, as Íosagáin blasted out of the traps.

Moments after his second point, Alan Kinsella made space for himself in the penalty area before thundering home a goal, as Kilcock didn’t know what had hit them.

Niall Gorman then made a wonderful save to keep out a Shane Walsh effort as Kilcock went in search of their first score, and Walsh would eventually provide it with a point from 14 yards out.

Colin Slevin responded with a free for Íosagáin, but misfortunte would strike the Port school moments later when a shot for a point from Daniel Devine crept in under the crossbar for a Kilcock goal.

Undaunted, Íosagáin came roaring back, and Slevin slotted over another free before Alan Kinsella added to his goal with a nice point from play. Mark Barry added a free to push the lead out to five, but Kilcock rallied to hit three in a row and leave the scores reading 1-6 to 1-4 after 20 minutes.

There would be no more scores before half time, but Íosagáin almost got a second goal, when Alan Kinsella beat Kilcock ‘keeper Fionn Talbot in a race for the ball, and palmed it past him 14 yards out. It seemed destined for the back of the net, only for Kilcock full-back Adam Murphy to make a wonderful last-ditch save.

Íosagáin were first to draw blood in the second half, with captain Ronan Coffey pointing, but the scores would start to dry up after that.

Daniel Devine pointed a free for Kilcock, and his midfield partner Shane Walsh scored 1-1 in the space of a minute to turn the game.

A Jack McNally point put three between the sides, and that set up a rip-roaring end to the game. Both team traded points so that the gap remained at three heading into the final stages, but it was Kilcock who killed the game off as late points from McNally and Conor Frayne sealed the win.