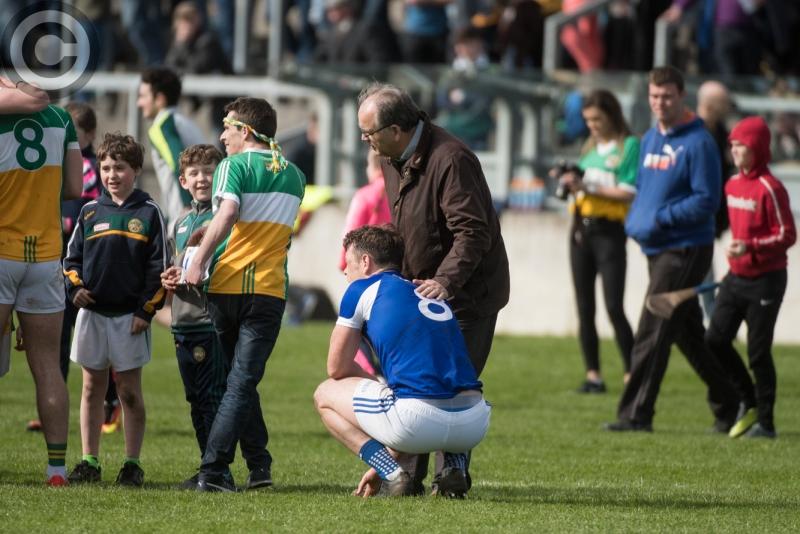 As the umpire waved away Darren Strong's last-gasp effort for a point on Sunday, the sinking realisation hit home for players and supporters alike.

Division 4 football now awaits Laois next year, the lowest rung of the national league ladder, and one the county has not dropped down to in over 50 years. The umpire may have confirmed it, but this has been a long time coming.

As a county, we have driven our most successful times through youth development. The All-Ireland minor winning teams of the mid 1990s formed the backbone of the Leinster SFC winning side of 2003.

Likewise, the minor teams which won the 2003 All-Ireland title, and 2007 Leinster title, continue to provide many of the current panel, and the players from those teams were part of the last competitive intercounty squad we had, the one which played in Division 1 of the NFL and the All-Ireland quarter-final in 2012.

Since then, we have been in a downward spiral, one which has sped up dramatically in recent years.

The problem for Laois, like a lot of counties or teams which are not traditionally successful, was that they weren't really sure how to continue being successful. There was an assumption that the good times would never end, and as people who brought about the success, like Sean Dempsey and Eddie Kelly, were promoted through the age ranks, they weren't properly replaced.

Instead of trying to recycle them back into the system, they were allowed to drift away. It is a mistake being repeated in hurling, the longer Cheddar Plunkett stays away from being involved with the county in some capacity.

Laois will never have the money or numbers that the traditional powerhouses of Leinster football, namely Dublin, Kildare and Meath have, but we could compete with them in the past because we were better organised than them, and were producing talented, confident footballers. That has not been the case for the best part of a decade now.

Since 2007, the last year the county won a provinicial minor football title, Laois have played 24 games in the Leinster Minor Football championship, and lost 13 of them, winning 11.

If you follow that up to U-21 level, the results are still fairly grim. Over the same time period, Laois have played 20 games, winning 10 and losing 10.

The losses have come against Dublin (4), Westmeath (2), Kildare, Offaly, Longford and Wicklow.

The wins have come against Wicklow (4), Louth (2), Kildare, Offaly and Wexford.

To put it bluntly, if the only teams you can regularly beat at underage level are the likes of Carlow, Wexford and Wicklow, and you're only breaking even with teams like Louth, Longford and Offaly, then you're going to end up in Division 4 of the NFL.

Until we start to produce more competitive underage teams, then the county will not compete as a force at senior level any time soon. Last year's run to the Leinster MFC final was promising, but there are still worrying signs, namely the one-sided nature of the loss to Kildare in the final.

We have been left far, far behind the likes of Kildare, Meath and Dublin, but performances against them are the yardstick for county's like Laois, and we have not done well against any of them for some time. For the most part, games against them at minor and U-21 level have been very one-sided over the last decade.

So, where do we go from here? Well, for a start, Laois GAA could publish the Review of Football in the county which they commissioned in January of 2015. Portarlington man Seamus Hunt was put in charge of producing it, after he had been a repeated critic of the football structures in the county at the monthly county board meetings.

The Review was to be completed by October of that year and handed to county chairman Gerry Kavanagh, but nothing has been heard about it since. If it was completed, then it wasn't publicised, and it would be interesting to know what exactly the recommendations were, and what has been done about them. If indeed the report was ever compiled.

Hopefully better days are not far away, but there are still worrying signs in the club scene. There are just five teams in the U-14 'A' football championship this year, with 16 in the 'B'. Traditionally strong amalgamated teams like Stradbally Parish Gaels and Killeshin-Crettyard are competing at 'B' level, which should alarm everyone around the county, and in particular those involved in those clubs.

This Easter, Laois GAA Coaching and Games are running a three day football camp for boys and girls aged 7 to 13, but are holding it in Knockbeg College. A fine venue no doubt with excellent facilities, but it pretty much rules out anyone from the three biggest towns in the county - Portlaoise, Portarlington and Mountmellick - from attending.

Laois's run to Division 4 of the NFL has probably been a decade in the making. Their road back to the top could take a lot longer than that.