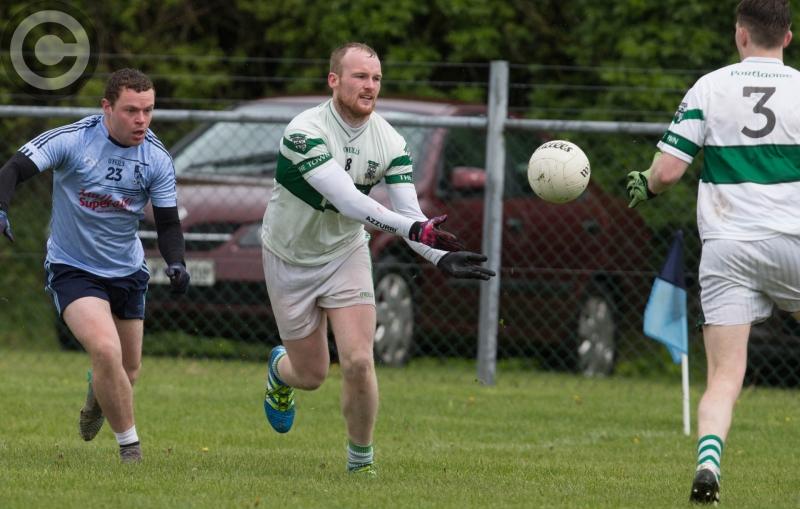 Portlaoise’s second half performance was enough to pick them up a second successive win, their fourth of the campaign, while Ballyroan Abbey fell to their third loss on the trot as they sit bottom of the table.

A strong cross-field gale teamed with a constant downpour for the majority of the game hampered much of the play with the half-time score a deadlock at 1-1 apiece - while Ballyroan Abbey were kept to a single point in the closing half as Portlaoise closed out the game strongly.

Portlaoise opened the scoring in Ballyroan on Sunday afternoon with the first goal of the day arriving after seven minutes when John Kavanagh finished to net following a well-worked passing move from The Town to get their noses in front.

Ballyroan Abbey replied from the resulting kick-out with corner-forward, Adam Brennan, converting a short-range free to bring the home side back to within two points.

A twelve minute scoreless period ensued before Ballyroan Abbey would this time hit the Portlaoise net. With twenty minutes on the clock Ballyroan Abbey broke forward and through a series of passes squared the ball across the box for the oncoming Eoghan Whelan to fist into the net as Ballyroan took the lead for the first, and last time in the game.

Another ten minute rough followed before Portlaoise broke the deadlock right on the stoke of half-time with midfielder, Ciaran McEvoy levelling the proceedings to leave the score at 1-1 apiece going in at the break.

A fresh set of jerseys for The Town, and a similar shuffle for high-numbers in the Ballyroan Abbey jersey bag, saw both sides retake to the field a bit dryer than they had departed as the worst of the weather looked behind us.

Portlaoise dictated the play from the throw-in as they would go on to notch 1-7 without reply, before Ballyroan Abbey fired their solitary point five minutes from time.

Scott Lawless set the Town in motion with a long-range free two minutes after the restart, before Conor Dunphy added their second of the half a minute later. Lawless converted another two frees for the Portlaoise cause leading to further points from Dean Cullen and Martin Staunton.

Portlaoise’s second goal of the day arrived with forty-seven minutes played as Lawless crashed the ball past Christopher Lalor in the Ballyroan Abbey goals with a quarter-of-an-hour left to play.

Substitute Adrian Kelly got in on the scoring for the Town, before Mark McDonald fired Ballyroan’s only point of the half following a clever one-two from short free. Portlaoise closed out the game with substitute Craig Rogers claiming the last score as Portlaoise ran out comfortable ten point victors.