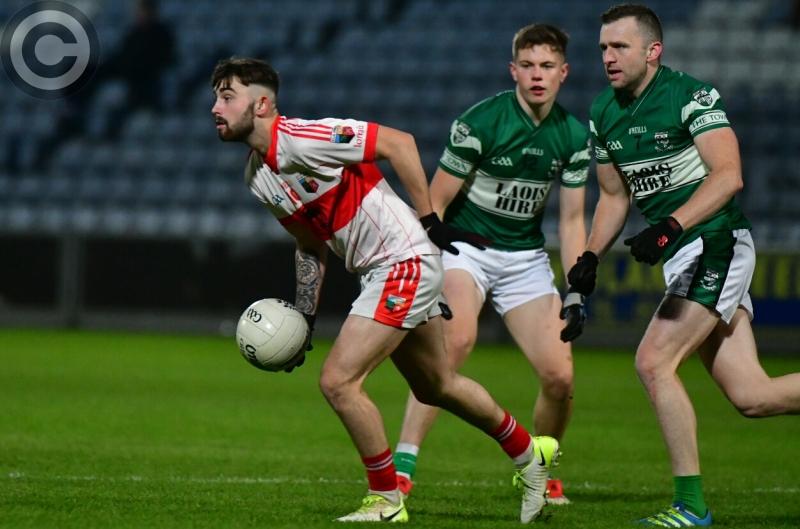 A last-gasp free from Jack Brown saw Portlaoise rescue a draw from a game they looked like winning in this Laois IFC final at O'Moore Park on Saturday night.

Portlaoise had been the better side for most the game, and lead by two points heading into injury time, before a frantic end to proceedings. Evan Costello bundled home a goal that looked like winning it for Emo, only for Jack Brown to kick a brilliant free in the 66th minute to earn his side a replay.

Emo were almost gifted the perfect start to the game, when Ray Nerney's misplaced pass from a free went straight to Paul Lawlor. He in turn put Evan Costello through on goal, but he hesitated too long, allowing Michael Nolan time to come out and smother his shot.

Costello would make amends for that miss not long after, as Nigel Murphy played him in and his powerful shot from a narrow angle flew past Nolan, giving Emo the early lead.

Portlaoise were fielding a young side, but the early goal didn't seem to affect them too much, and Jason Maher opened their account soon after with a well-taken point. Jack Brown then got their second with a wonderful long-range free, before Maher was on hand again moments later. A high ball into the Portlaoise full-forward line saw Maher break the ball on the edge of the square, and he then toe-poked the ball past David Whelan for a goal.

Ronan McEvoy then threaded a shot between the posts for Portlaoise from the right wing, and from being three points down, in the space of four minutes Portlaoise had put themselves points in front.

Evan Costello hit back for Emo with their first score in ten minutes, a well-taken point from the right wing, but Craig Rogers soon canceled that out.

Paul Lawlor then fisted over the bar from close range for Emo, leaving two between the teams, as the play remained scrappy for the most part in a disappointing half of football. Portlaoise were still playing the better football though, and Ross Brennan got on the end of an excellent pass from Craig Rogers to fire over the bar from 30 yards out, pushing his side three clear heading into injury time.

Emo had the final say of the half though, as Darren Strong hit the target to leave just two between them at half time, 1-5 to 1-3.

The second half got off to a bright start thanks to Emo, as they fashioned a wonderful goal moments after the restart. From a quickly taken free, the ball was played into Paul Lawlor, whose quick hands put Nigel Murphy through on goal, and his low shot nestled in the bottom corner.

That should have been the kickstart that Emo needed, but just as in the first half, Portlaoise responded to adversity remarkably well. Ronan Molloy pointed from 30 yards out, before Martin Staunton made room for himself soon after to slot over the bar.

Ronan McEvoy then registered his second point of the game for Portlaoise and Craig Rogers landed a free, seeing Portlaoise move three clear midway through the half, 1-9 to 2-3. The impressive McEvoy then brought up his hat trick for Portlaoise, with the club's second string team putting themselves in a strong position heading down the home straight.

Evan Costello and Craig Rogers then traded frees as Portlaoise maintained they grip on the game, and even two late Costello frees at the end of normal time didn't look like being enough, as Portlaoise lead by two points as the game headed into added time.

In a truly madcap finish, Darren Strong's high, hopeful ball into the penalty area was broken down by Paul Lawlor, and Evan Costello won the ball and bundled it over the line.

That goal sent the Emo crowd wild, and there was even a mini pitch invasion as they thought the game was over, while a fight broke out in the Portlaoise goalmouth. When calm was eventually restored a couple of minutes later, Portlaoise won possession from the kickout, and Jason Maher won them a free 50 yards from goal.

With over 65 minutes on the clock, Jack Brown stepped up to take it, and he showed nerves of steel to stroke the ball over the bar, ensuring the teams would have to do it all again.