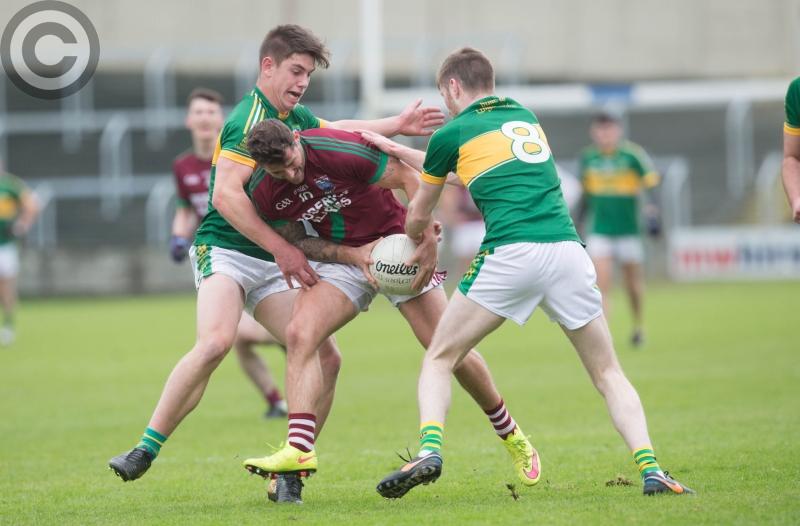 Ballylinan are through to their first Laois SFC final since 1987, as they saw off the challenge of Portarlington in a cracking semi-final at O'Moore Park on Sunday.

After racing into a nine point lead in the first half, they found themselves behind at half time, before hitting two goals in a minute after the break to put themselves on course for the final.

A good, competitive and closely fought game was expected here, but it didn't start out like that, as Ballylinan dominated the early exchanges. Gary Walsh pointed a free with a little over a minute gone, and then Andy McEvoy added one from play soon after.

David Murphy then opened Portarlington's account, but Ballylinan looked dangerous with every attack. They got the first goal of the half soon after, as Andy McEvoy's shot from the right wing looked to be tailing wide, but Brian McAuley inexplicably kept it in play. Gary Walsh won possession, rounded his man and buried it in the bottom corner.

Portarlington looked shell-shocked at this stage, and Ballylinan kept pouring forward. Cathail Dunne added a point from 35 yards and Walsh chipped in with another from play, as Ballylinan lead by six points after 12 minutes. Things got even better for them then when Jamie Farrell cut in from the left wing and pinged a shot into the bottom corner off the outside of his left foot.

Ballylinan were now nine ahead and cruising, but in a remarkable first half, they could find themselves behind at half time.

Port's comeback started when Colm Murphy shot for goal was saved by Aidan Walsh, but David Murphy swept home the rebound. He then added a superb point a minute later, and Portarlington were finally up and running.

Murphy brought his, and Portarlington's, tally to 1-3 with another point, before Gary Walsh's powerful shot for goal was tipped onto the crossbar by Brian McAuley. Moments later, Jason Moore played Colm Murphy through on goal, and he rounded Aidan Walsh before tapping into an empty net. The same player then fisted a point, and Port had drawn level at 2-4 apiece.

Cathail Dunne edged Ballylinan back in front with a point, before Port got their third goal in 12 minutes. Colm Murphy's perfectly weighted pass found brother David 20 yards out, and he advanced on goal before rifling a shot to the top corner.

Kevin McGrath then chipped in with a point for Portarlington, and at half time they lead 3-5 to 2-5. Out of the 5-10 scored by both teams, 5-9 of it had come from play in a marvelous 30 minutes of football.

If you were afraid the two teams might have played themselves out in the first half, then you're fears were allayed early on, as Seamus Lacey scored a point for Ballylinan with a little over two minutes of the half played. David Murphy responded for Port with an excellent point from a tight angle, only to see Alan Farrell respond for Ballylinan.

Goals made a return to the game once again after that, as Ballylinan struck two in the space of a minute. The first went to Cathail Dunne, as he palmed the ball to the net from close range after Brian McAuley had misjudged a long ball and allowed it to bounce over his head.

Moments later, Andy McEvoy was in space on the edge of the square and his left-footed shot gave McAuley no chance, as Ballylinan had turned the game on its head. Jamie Farrell and Gary Walsh then pointed either side of a Colm Murphy free, as Ballylinan took a five point lead into the final ten minutes of the game.

Try as Portarlington might, they just couldn't regain the form they had shown in the first half, and both Colm Murphy and David Murphy saw chances for goals slip away. They got the gap down to four with a free from Murphy, but Cathail Dunne's late point put the seal on their place in the county final.