GAA FEATURE - The men who would be king... we take a look at the three candidates to be the next Laois GAA Chairman 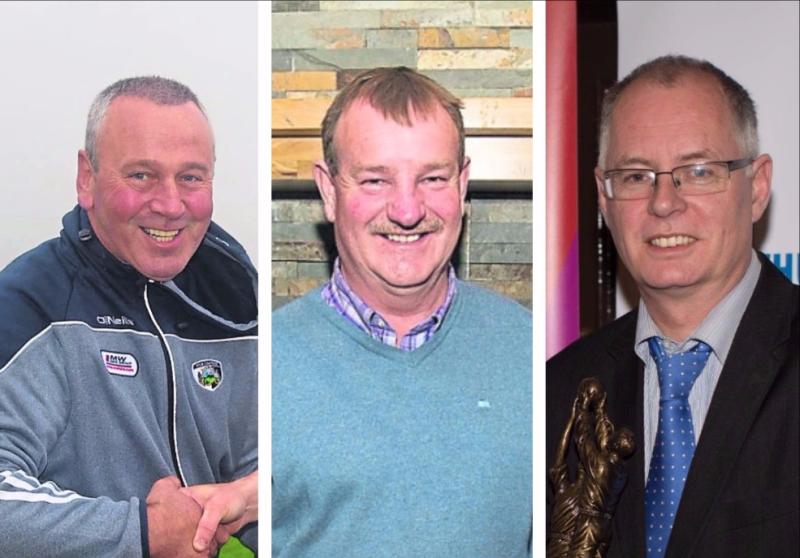 The Laois GAA Convention will not take place for another two months, but three men still threw their hat into the ring this week to be declared the next chairman of Laois GAA.

Here, we take a look at all three candidates so far declared, and assess their merits for the top job in Laois GAA.

He would appear to have the major advantage at the moment, in that he is perceived to be the only 'football' candidate in the running, although he would be the first to stress he is not solely a 'football' man.

Originally from Edenderry, something which could well cost him votes in the minds of some delegates, he has been involved at county board level for the last 15 years. He has also been involved in organising two national Féile's, including last year's Hurling Féile, which was one of the biggest ever. He has been Coaching and Games Officer in the past, and is currently the Football Liaison Officer, providing the link between county football teams and the County Board.

He has also been a referee, and chaired the Laois Referees Association for around ten years.

Being perceived as a 'football' man, whether he likes it or not, currently stands as a major tick in his favour. With football at a particularly low ebb, football clubs will want to see someone in the chair who will make the county competitive again, and for whom football is at least perceived to be their number one priority.

Losing to Sean Mortimer in the vote for Vice Chairman last year will have been a major blow to him though. With four years already done in the job, the general etiquette of these things is that you're given the fifth, and final, year of your term unopposed.

The defeat was a major shock on the night, and a clearly stunned O'Neill sounded like he was ready to walk away from the Laois GAA scene in his concession speech afterwards. Still, the final tally showed he had decent support in the room (Mortimer won by just three votes, 72 to 69).

Having already lost to the Camross man, if this was a head-to-head between them then he wouldn't be favoured, but a likely split in the hurling vote works in his favour.

However, there is no guarantee that he will get the lion's share of the football votes either, as many clubs were rankled by his role in the SFC relegation fiasco of 2014. If that controversy has abated for him, then he's probably the favourite as things stand, but not by a huge margin.

The Trumera man is looking for a second term as Laois GAA Chairman, having been at the helm from 2007 to 2012. He has been a long-time county-board official, and since his spell as Chairman he has been PRO and Central Council Delegate.

He is currently 'double-jobbing' as he has taken on the role of Juvenile Committee Chairman along with his Central Council position. An affable and broadly popular figure, he has shown an ability to garner a good number of votes in the past, and has the most experience of the three candidates in the running.

His past record is both a tick for, and against, his candidacy here. He has the advantage on both his rivals in terms of experience, but clubs may be dubious of sending someone back for a second term at the top.

Along with that, with the general consensus seeming to be that Laois GAA is at an incredibly low ebb, Allen may cop some of the blame for that, having been chairman of the County when the slip down the rankings began.

In spite of that, he has a proven track record in garnering votes. Back in 2014 he defeated Gerry Kavanagh in the vote for Central Council delegate, a victory which surprised many in the room given Kavanagh was the sitting Chairman at the time.

If some football clubs still have concerns over O'Neill, and don't know enough about Mortimer, they could view Allen as the safer option because they already know him. The fact he's prepared to give up the Central Council seat, and the perks that come with it, also speaks in his favour.

On the flip side, himself and Mortimer will surely split the hurling vote between them, so votes from football areas, if they can get them, will be massive.

A relative neophyte in this race, his involvement at county board level in recent years has been limited to hurling committees, rather than any official positions on the board.

His experience was limited to the role of Hurling Liaison Officer until his surprise victory over Peter O'Neill last year, which catapulted him into the Vice Chairman's position. That was a narrow win, but a significant one nonetheless, given his opposition here.

He has previously been Chairman of Camross, and has the least amount of experience at County Board level of the three candidates, which could well be in his favour.

After his shock win last year, it was always going to be interesting to see whether Mortimer would be happy to remain in his role as Vice-Chairman for a few years, or push on and take a run at the top job at the first opportunity.

He has gone for option number two, and is looking to pull of what would be a second stunning victory in successive years. With some momentum behind him from last year and no incumbent to beat, now is the time for him to run, but he is likely still viewed as something of an unknown quantity by a good few football clubs.

Getting his message out to them, whether they vote for him or not, will be just as important as trying to secure the hurling vote ahead of Allen.

His lack of experience at the top level may well be in his favour, as both O'Neill and Allen could suffer from a desire to see a new face at the helm. With relatively little experience compared to his opponents though, he has to convince a lot of people that he has what it takes to spearhead the county through some difficult years ahead, particularly from a football point of view.

Outside of those three, the potential still remains for another candidate to declare their intention to run as well.

Kieran 'Shaggy' Leavy from Portarlington is routinely nominated for the position by his club, and has a good record at pulling in votes too, but it remains to be seen if he fancies a crack at the top job. He is currently Assistant Treasurer to Martin Byrne.

Martin Byrne would also be a popular candidate, were he to run for it, but he is so important to the financial side of things in Laois, particularly at the moment with the Centre of Excellence being built, that it's arguably more important he stay where he is. Indeed, Laois GAA got special dispensation to make the Treasurer's position exempt from the five year rule, which was with the explicit intent of keeping Byrne in the position.

Liam O'Neill is believed to have been approached to consider a return to local GAA governance, but with another Trumera man now in the running, it seems highly unlikely he would run against a fellow club mate, if he was ever interested in running at all.

Paschal McEvoy from Timahoe is understood to have given consideration to running for the job earlier this year, but has since opted against the move, due to his work commitments as a County Councillor in the Portarlington/Graiguecullen municipal district.

It seems unlikely that someone outside of those currently sitting on the board would declare for the position. Getting volunteers to take any position is difficult at the best of times, and with the amount of work which lies ahead for the next Chairman, the chances of someone parachuting into the top job appear remote.

Regardless of that, what is equally important this year is that some new voices and faces make the move to take up a position on a board which is in need of reinvigoration. It is not good for either the members themselves, or the wider GAA in Laois, that the same people are involved year in, year out, with only their position at the top table changing.

It is still two months before a vote will be cast, so there will be many more twists and turns to come, and we could potentially have candidates added to the race, or some may even drop out.

The only thing we know for certain now, is that whoever steps up to the lectern to deliver their acceptance speech on December 4th will have a big job on their hands.