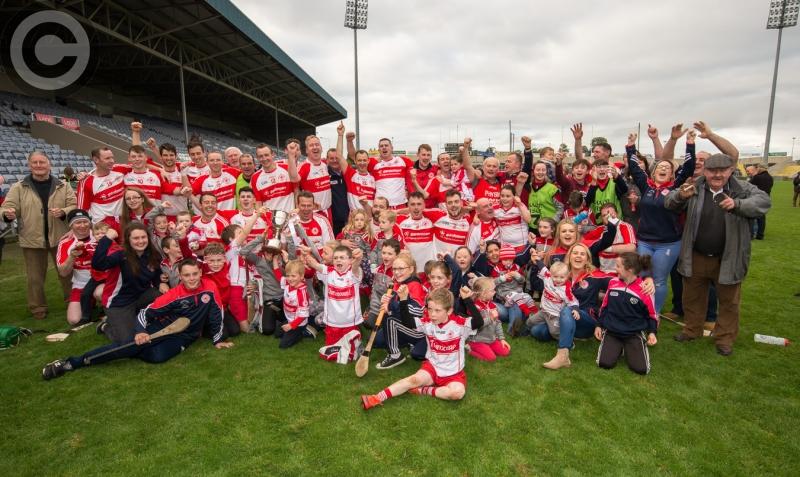 Losing one county final by the slimmest of margins is a gut-wrenching occurrence for any club, but losing two on the same day is almost unimaginable.

Rathdowney-Errill were once again left kicking themselves after they let a three point lead with five minutes to go slip, and allow Trumera the chance to compete in the Senior ‘A’ Championship once again.

Trumera came flying out of the blocks in this one, as Dylan Lalor found the target with his first free, to which Paul McSpadden landed a monster point to get Trumera off to a fine start.

However, Rathdowney-Errill weren’t long getting their bearings, and they returned the favour with two points of their own, Daniel Bourke and Ray Bowe the scorers. Trumera were playing the stronger hurling earlier on though, and it told, as Niall Sinnott sandwiched two points from placed balls with a ’65.

Brian Bowe sold a lovely dummy and point to get Rathdowney-Errill back on the scoreboard, but Joseph Coogan showcased his well-known hurling ability with a superb long-range point.

Rathdowney-Errill managed to reduce the arrears back to just the singular point, with centre forward Eoin Burke hitting twice between the posts in the space of a minute.

Damien Madden produced an excellent save for Rathdowney-Errill to deny Trumera a goal, but that couldn’t stop his side from continuous efforts dropping short into the grateful hands of the keeper at the other side of the field, Ronan Kavanagh.
Cathal Brophy ended the half with a point for Trumera, and they went in with a two point cushion at the break.

Both sides seemed jittery at the beginning of the second half, as frees were missed and players were trying the spectacular shots, instead of showing composure.

Enda Meagher left just one in it, before Eoin Burke equalised for Rathdowney-Errill with his third of the contest.

However, Trumera responded with conviction, Dylan Lalor converting a free and Cathal Brophy adding on a further two points to leave the gap at three with twenty minutes to play in O’Moore Park.

Rathdowney-Errill responded very emphatically themselves though, as they would hit the next five scores to find themselves leading by two. Enda Meagher scored three times in this spell, two frees and one from play, with Jordie Kavanagh grabbing two scores himself as Rathdowney-Errill had all the momentum with ten minutes to go.

Damien Lalor got the Trumera crowd roaring on their side once again, as his point left just one separating the sides. Rathdowney-Errill would put over the next two though, Enda Meagher (free) and a fatigued looking Brandon McGinley, who played the Junior final earlier, scored as they went in with a three point lead with five minutes of normal time remaining.

They failed to score again though, as Trumera’s fitness came into play, and with scores from Lalor, Brophy and two further Lalor frees as they bounced straight back up and claimed their second Intermediate championship in three years.