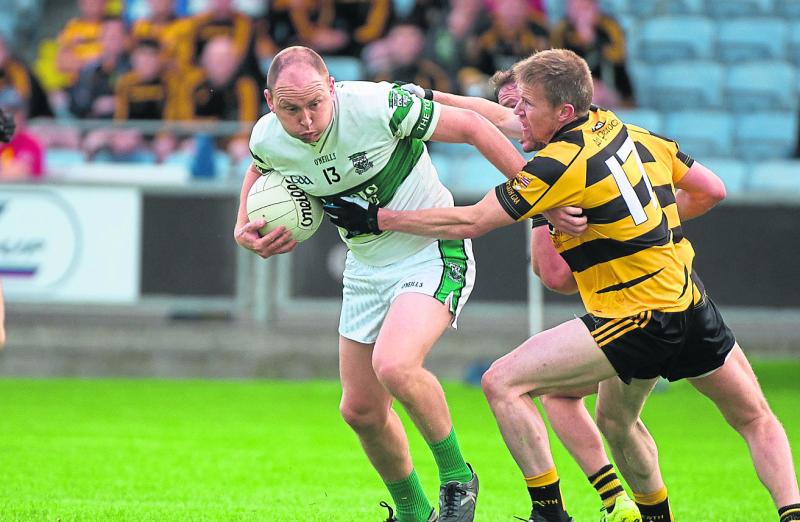 Brian McCormack in action for Portlaoise.

This weekend's final should be entertaining for lots of reasons, but we've picked out four particular aspects of the game to keep an eye out for.

Ballylinan have been a joy to watch this year, and it is their full-forward line which have lead the charge. Between them, Gary Walsh, Cathail Dunne and Andy McEvoy have scored 6-35 in four championship games, with only 0-9 of that coming from frees.

They are, in many respects, the perfect combination. Dunne has the size and physicality, McEvoy is pacy and has a lethal left-foot, and Walsh is a combination of both traits, as he has pace, power, and is deadly accurate. They will take some stopping this weekend.

One of Portlaoise's great strength's is their ability to create an overlap, or to always have a man in space to receive a pass. More often than not, they achieve this by giving their defenders license to roam forward, which they do, a lot.

Four of their starting six defenders have scored from play in the championship this year, and at one stage in the semi-final against Graiguecullen, they had three defenders inside the Graiguecullen 45 supporting an attack.

It makes it an exhausting day for the opposition forward line, and it's a great way to disrupt the way the opposition have planned to set up, as their players end up making runs into places they did not plan to be.

The Outside of Bruno McCormack's Left Foot

There are a few fantastic left feet in use throughout the Laois senior football championship, with Ross Munnelly and Jason Enright two fine exponents.

However, Bruno McCormack is right up there with the best of them, and it is remarkable how often he manages to curl over a beatifully executed shot off the outside of that left peg.

We'll surely see it at least once this Sunday.

If we are not treated to a goalfest in this Sunday's game it'll be a travesty. Between the two of them, they've scored 20 goals so far in the 2017 championship. More of the same this Sunday, please!