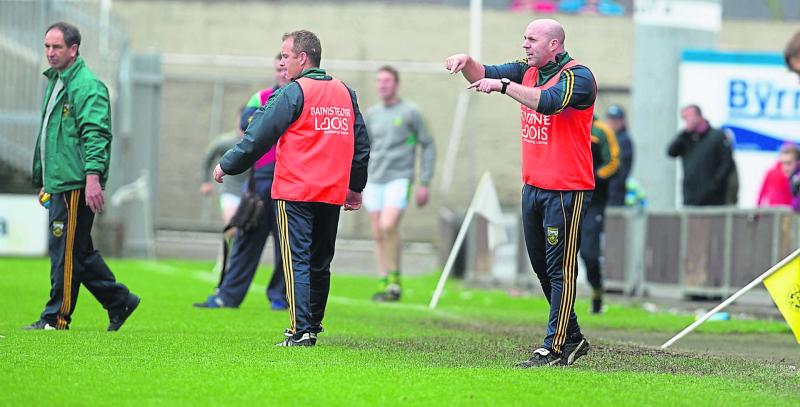 The Ballylinan management team during their semi-final win over Portarlington. Pic: Alf Harvey.

This Sunday, Paul Julian will take a trip he hasn't made in thirty years.

One of the few people involved with this Ballylinan squad who was around for their 1987 final appearance, he has had to be patient to experience it for a second time.

"I was nine at the time" recalls Julian, as he allows his mind to bring forth what memories remain of the biggest day in the club's history to date. "It was a big occasion, there was lots of bunting and flags all over the village.

"At the end of the day, things didn't go the way we wanted them to, the team just didn't perform on the day."

Within that lies a cautionary tale for his young side, the vast majority of whom were not even born back in 1987.

Hype and fanfare seem unlikely where Julian is involved, as his calm, understated demeanour doesn't seem susceptible to the unique pressures preparing for a final can bring. He is measured in what he says, and this is a job he takes seriously.

"I had been there with Gary (Kavanagh) from the start, and after Gary left I was asked to do it, and it is an honour and a privilege for me to work with this group" states Julian, when asked about how he found himself in the role. As a Ballylinan man, he is aware of how much this game means to his players, friends and neighbours.

His first year in the job could hardly be going any better. He put a good back room team in place, as Kieran Kelly and Eamon Lacey joined him on the sideline, along with Pat Cuddy as a strength and conditioning coach, while the club have been a huge support too.

It's also worth noting his team are going for a double. They won the ACFL Division 1B title earlier this year, and while some clubs remain indifferent to the league, it has been a major boost for Julian and Ballylinan.

Even the manner they won it, conceding a penalty in injury time only to respond by kicking two late points to win it, pointed to a team heading in the right direction.

"We had a good league, we only lost three games, twice to Portarlington and once to Killeshin, but we rectified those losses in our minds. The league was very important from start to finish, because they are better than any practice matches.

"We got to try out different lads, and then in the final, it was in injury time when Port scored their penalty, but we came back from that. Our aim was to win that league title, we wanted to win it and it has been a great platform, it worked a treat for us to take it seriously."

The knock on effect of winning cups, outside of the confidence it gives a team, is what it does to the club as a whole, as Julian noted after the league win. "At any grade, to win a cup is a great thing for a club. To have kids looking up to you senior players, and wanting to be the best they can be is a great thing, and winning is everything for those kids."

They have earned a lot of admirers along the way, with their style of play very impressive, as Julian's team really like to have a go. "That's what it's all about, people will always enjoy any sport where a team is prepared to have a go. The lads play with no fear and it's after standing to us so far."

When focus turns towards the final, he is understandably cautious about his teams chances. "Portlaoise are an outstanding team, this is their eleventh final in a row, and there is no two ways about it, no one is giving us prayer. They have great experience in their side."

In spite all of that, his advice to his side remains simple. "It's a big occasion for everyone, and we just have to enjoy it and embrace that occasion."