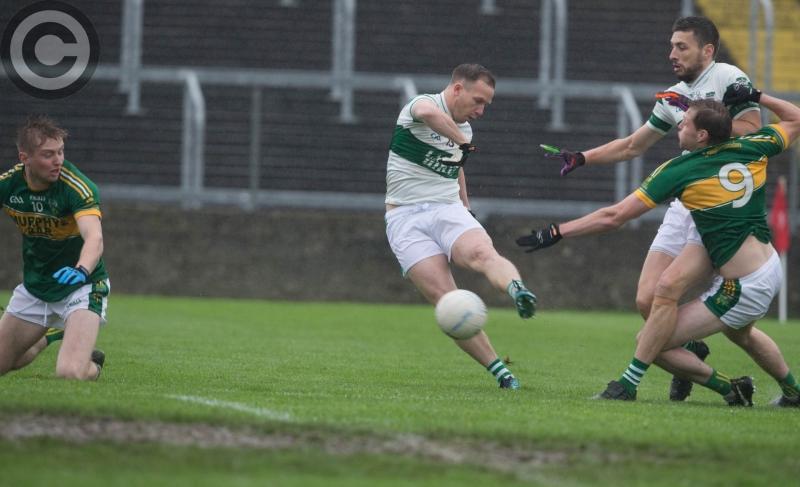 Portlaoise are Laois SFC champions for a 33rd time, as they proved too strong for a gallant Ballylinan side in O'Moore Park on Sunday.

They had to overcome a rocky start, when rank outsiders Ballylinan put them to the pin of their collar for much of the opening stages, but their experience eventually told, as they ran out convincing winners.

Ballylinan got off to a solid start, with captain Gary Walsh doing his bit to settle them into the game. He opened the scoring with a little over a minute gone with a free, and added another from play five minutes later. In between, Portlaoise had seen two goal chances go to waste, as Paul Cahillane first hit the sidenetting, before his flicked effort from a Bruno McCormack long-ball went wide.

Portlaoise finally opened their account in the tenth minute, when midfielder Ciaran McEvoy burst through and fisted the ball over the bar from 20 yards out. Ballylinan responded with another Walsh free, and then Scott Lawless hit the target for Portlaoise from the right wing.

The pace of the game was slowly starting to pick up, but it was Ballylinan in the ascendency, as Walsh made it four in a row for him with a brilliant point from out on the left side. Alan Farrell then pushed them three clear when he punished a slack Graham Brody kick out.

Portlaoise were struggling get going now, and it was all down to Ballylinan, who were defending superbly and picking off scores at their ease. Paul Cahillane (free) and Andy McEvoy exchanged points to keep Ballylinan in the ascendency, and it was going to take something special from Portlaoise to haul themselves back into it. In the 20th minute, that's exactly what they produced.

A typical, slick handpassing move from Portlaoise unlocked the resolute Ballylinan defence, and the ball was eventually played across the square, where Scott Lawless had the simple task of palming it to an empty net. That score energised Portlaoise, and Cahillane added on two points to see them take the lead for the first time.

They then took a stranglehold on the game, albeit in somewhat controversial fashion. A Ballylinan attack came to nought when their attacker ran into referee John Flynn, and Portlaoise picked up the loose ball. A few seconds later the ball was in the hands of Paul Cahillane 25 yards out, and he cut inside his man before finding the bottom corner. Ballylinan were aggrieved, as they felt it should have been a hop-ball for the incident with the referee, but the goal stood and they were now five points down.

Five soon became six when Bruno McCormack landed an excellent point from 35 yards out, but a Cathail Dunne effort left Ballylinan five in arrears at the break, 2-6 to 0-7.

They needed a good start to the second half, and duly got it when Gary Walsh stroked over a long-range free to get them within striking distance. After that, both teams began to struggle in front of goal, as they missed scoreable frees.

Portlaoise eventually ended the scoring drought when Adrian Kelly launched one over from distance, and captain Conor Boyle added another in the 44th minute. Paul Cahillane then made space for himself 25 yards out to push Portlaoise into their biggest lead of the game, seven points, 2-9 to 0-8 the score.

It never got any better than that for Ballylinan, as Portlaoise, with all their experience, knew exactly what to do from there. Gary Walsh briefly got Ballylinan within six thanks to another free, but Portlaoise just powered from there to the final whistle.

Benny Carroll and Conor Boyle both pointed before Paul Cahillane hit a brace of frees to take whatever hope remained in Ballylinan out of the equation. Then, with normal time elapsed, Paul Cahillane raced through on goal before squaring to John Kavanagh, as he tapped to an empty net to put the seal on the Portlaoise victory.