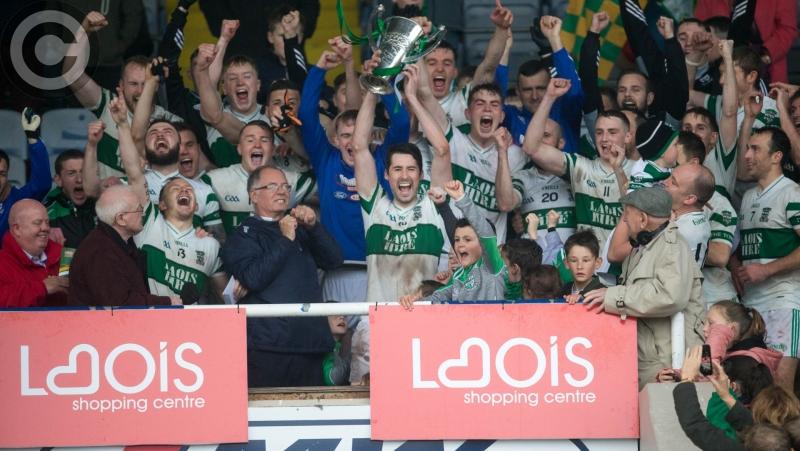 After suffering heartbreak last year, and being forced to watch Stradbally captain Colm Kelly lift the Jack Delaney cup instead of him, Portlaoise captain Conor Boyle was over the moon to regain the championship for Portlaoise for the tenth time in eleven years. He expressed his emotions after the game.

“It feels brilliant. We’ve waited a long time, and it’s a year coming now. We were back training in November, so it’s a long year.”

Last year’s defeat seemed to almost rejuvenate Portlaoise this year, and Boyle admitted as much. “We were very disappointed to lose a county final last year, obviously. It’s tough to lose a county final with the last kick of the game. The lads were hungry this year. We said it at the start of the game, we wanted to get it back. We wanted to get out there today, and perform, and I feel we deserved it.”

Portlaoise were a different team to the one that played last year, with a lot of fresh faces added to the side, replacing experienced campaigners for one reason or another.

Boyle believes that while the likes of Cahir Healy, Stuart Nerney and Brian Glynn were huge losses, the fresh faces in the team did very well. “It’s very much a team in transition.A few of the lads got a few games in the league, really stood up. They set the mark this year.

“There were big performances from Ciaran McEvoy and David Holland today. David Holland, in particular, was super today. Benny Carroll as well, it was his first county final this year. These lads were super this year, and the older lads coming in when we needed them as well for a bit of composure.”

Despite the full time score line suggesting one way traffic, Ballylinan were actually ahead by three after fifteen minutes, and were still very much in the contest ten minutes into the second half. However, they couldn’t sustain it, and Portlaoise dominated the remainder.

“It was anything but an easy game” admitted Boyle. “They started with great energy, and they went three points to no score up. We were lucky enough to get a goal, and that really settled us. We then got another goal, and we probably could’ve put the game to bed before half-time.

“We missed a goal chance which kept them in it. They came out fighting again in the second half like we knew they would do. They’re a good team, I know a lot of their players, mainly the two Farrell's and Gary Walsh. I know they’re disappointed, but I’m sure they’ll be back again next year.”

READ ALSO - Paul Cahillane relieved to get back to winning ways