A total of 23 awards revealed, with one club celebrating five different winners 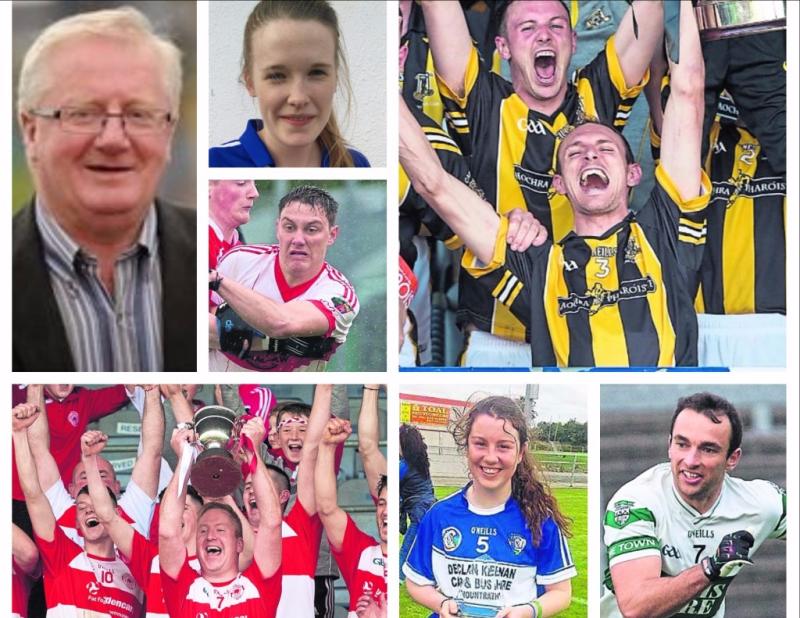 The Laois GAA Award winners for 2017 have been announced, with 23 awards handed out to sportsmen and women from a total of 16 different clubs

Joseph Phelan from Camross and Gareth Dillon from Portlaoise took the top awards in hurling and football respectively, having played key roles in guiding their teams to senior championship glory.

There is also recognition for former Leinster GAA Secretary Michael Delaney with the Hall of Fame award, while the Laois U-16 Camogie team are to be given a Special Merit Award, after winning the All-Ireland title this year.

It promises to be a night to remember for Camross, with five club members receiving awards. Both Shanahoe and St Joseph's have two winners each.

There are 23 award winners in total from 16 different clubs, with the full list of winners as follows;

A joint captain of the Camross team this year, Phelan saw off some stiff competition from the likes of Willie Hyland and Gearoid Burke for this honour. Having started out his career in the forwards, Arien Delaney's decision to move him to corner-back has been a masterstroke, and he has flourished there ever since. An excellent year in defence for Camross, as he rarely put a foot wrong on the tightrope that is the full-back line.

The Portlaoise man was superb this year, a model of consistency as he made a telling contribution every time he stepped onto the field. His pace is incredibly hard to defend against, and he links defence and attack effortlessly for Portlaoise. Remarkably, couldn't get a game for Laois this year, but has certainly put himself in the mix for 2018.

The Ballyfin Gaels sharpshooter was central to his team's hopes throughout the year, as he took on the majority of the scoring burden and, as a result, fired his team to a surprise SHC 'A' title, with victories of The Harps and Colt Gaels in the semi-final and final respectively.

Fantastic all year long for Emo, starting in their Round 1 game against Annanough when he scored what was probably the goal of the year after a run forward from wing-back. His eye for goal was a feature time and again for Emo on their run to success.

The long-serving Trumera defender captained his side to the IHC title this year, a fitting reward for him after a distinguished career with the club.

Delaney retired from the role of Secretary with the Leinster Council, a position he held for over 25 years, during which time he cultivated a reputation as one of the best GAA administrators in the country.

Portarlington have an excellent crop of players at the minor age grade, but Coffey was particularly impressive this year. He topped it off with 1-5 in the final against Emo-Courtwood-The Rock to seal the title for his side.

Took on the scoring burden for the Camross minors, and did so with aplomb, guiding them all the way to the final where his haul of 0-11 against Castletown-Slieve Bloom helped secure the title.

A hugely talented youngster, he capped off his U-17 campaign with a haul of 2-5 from play in the county final against Stradbally Parish Gaels.

A rock at centre-back for Camross throughout their run to the U-17 title, Dowling looks to be another exciting prospect from the club's youth ranks.

After losing out to O'Moores in 2016, Camross came back with a renewed vigour this year and reclaimed the county title. Ashling Burke was excellent at the heart of their defence, particularly so in the final where they blunted the O'Moores attack for the majority of the game, allowing themselves to run out deserving winners in the end.

All-Ireland titles are hard won, but the Laois U-16 camogie team got their hands on one this year when they held their nerve in a replay with Antrim to secure the All-Ireland U-16 'B' title. Featuring some really exciting talent in the side, it was a huge boost to Camogie in Laois, with a good number of these players likely to feature for the senior side in the not-too-distant future.

Hardly needs much of an introduction, but probably deserves an award just for getting back on the field after suffering an injury to his vertabrae seven years ago. His return to action saw him slot right back into the groove, and he was outstanding for St Joseph's this year.

The scorer-in-chief for so long for Ballypickas, Lalor finally got his hands on a Laois JHC 'A' medal in 2017, as he played a crucial role in guiding the club to a long overdue, and well-deserved, county title.

Something of a football revolution is stirring down in Errill, as they have now won back-to-back promotions to see themselves qualify for the JFC 'A' in 2018. Laois hurler Kelly was a stand-out performer for them throughout their campaign this year.

Junior B Hurling - Michael Bermingham (Mountmellick)
It has been a superb year for Bermingham, as he has won JHC 'B', SHC 'A' and ACHL Division 3 medals, as well as appearing in the JFC 'A' final with Kilcavan. Another consistent year from him, as he played a huge role in the success of all teams he featured with this year. Finished off 2017 by scoring 1-8 for Mountmellick in their Division 3 league final on Sunday.

Molly won two All-Ireland medals this year, the first one coming in the All-Ireland U-17 Handball final, where she became just the third Cullohill Handball Club member to win an All-Ireland title since 1990. Followed that up with an All-Ireland camogie medal later in the year, winning Player of the Game in the final to boot!

It's a tough gig being a referee, especially so in hurling in Laois, where the lack of numbers means you'll always be busy. Lalor has carved out a reputation as one of the best around though, and always tries to let the game flow, which is a most welcome trait in any referee.

The Heath continue to set the standard in All-Ireland rounder competitions, as they qualified for both the Senior Mens and Senior Mixed All-Ireland finals this year. Damien Keane was central to the success of both those teams, captaining the senior mens team and also featuring for the mixed side, where his fielding was a stand-out feature of both teams success.

After four years of torment, the St Joseph's ladies football team finally got the victory their patience deserved when they beat Ballyfin in the JFC final this year. Langton was central to ending that run of three successive final defeats, as she scored 1-5, from play, in the final.

Park-Ratheniska ladies bounced back up to the senior ranks this year, and Anna Healy was at the heart of that success, powering the team to glory from midfield. One of the standout players with Scoil Chríost Rí in recent years, she has transferred that form to club and county level, scoring a point in their victory over Shanahoe in the IFC final.

The Sarsfields bandwagon rolls on in Laois, winning their fifth Laois SFC title in a row this year. They are a fantastic team, and it is players like Mags McEvoy which keep them at the head of the pack. While their forwards run up big scores at one end of the field, McEvoy marshals the defence at centre-back, ensuring they can put down the foundations needed to keep their remarkable run of success going.

It hasn't been an easy time for the Laois senior team in recent years, but one way to drag themselves back to the top is with players like Martha Kirwan. A long-time servant, her performance levels never dropped in 2017, and she was Laois' best player throughout their league and championship campaigns.

The awards for Scór, U-21 Football and U-21 Hurling will be confirmed at a later date.