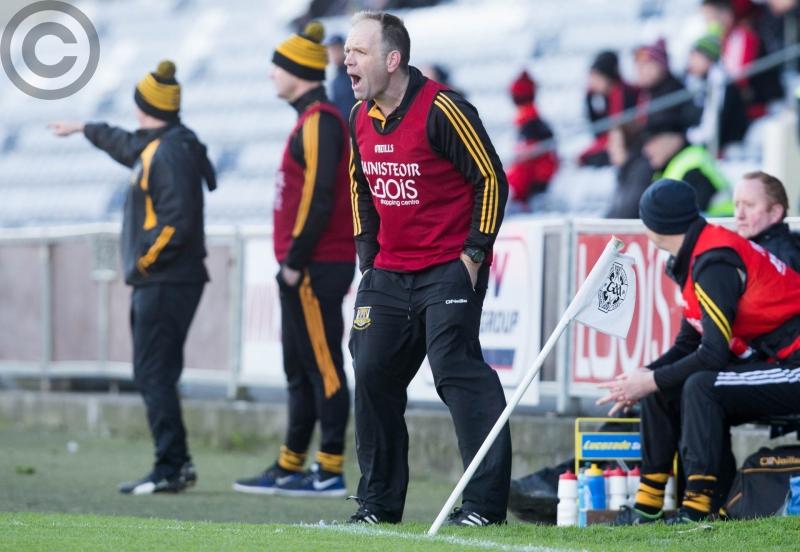 Camross manager Arien Delaney lamented the six week break his team had to navigate between their county final victory and Sunday's loss to Mount Leinster Rangers.

His team took roughly forty minutes to find some form in this game, by which time they were four points down and reduced to fourteen men.

However, they rallied admirably and trailed by just a point heading into injury time, only to be hit by a late barrage.

Speaking after the game, Delaney pointed to the month and a half between competitive games as a difficult aspect to deal with for his side. “I think the six week break was massive, myself. When you look back on it, if you saw the second half, when we were down to fourteen men, that was the real Camross, how much we battled.

“There was only a point in at the end of normal time, so to me that was the real Camross. In the first half, we were stuck to the ground a little bit, we were a bit lethargic, and I put that down to the six weeks.

“We got practice matches and we trained very, very hard, and I couldn't ask for any more from the players, but the point is nothing beats championship, and I think they have played semi-final and final since we played our final, and I think that means a lot.”

While acknowledging the difficulty in bridging the gap, he was also keen to pay tribute to the efforts of the players over the course of the year. “It is yeah, it's not easy, but they've had a very, very good year, and we can't ask any more of them.

“They've won Palmer Cup, League and County Final, and this, it wasn't bonus territory as such, but it was the cherry on top, and unfortunately we came up a little bit short today.”

One area where their lack of precision became evident was in attack, where they struggled to make a breakthrough. “Yeah, and they funnelled lads back and they put five across the half back line, whereas our use of the ball might have been a little bit better, but there's no fault or blame with that.

“I'm a very proud Camross man today, and in fairness to the boys, I said it to them in there, I couldn't be more proud of each and every one of them, and that goes from the committee to every young boy and girl from Camross that came out to support us here today.

“It's a sad day, but it's great to represent Laois, and I'm disappointed that we couldn't get over them, yes they are a strong side, but the second half was the real Camross.”

That emergence of the real Camross almost got them a result too, but as they searched for an equaliser they were caught by a late barrage. “Yeah, and they got on a bit of a run then because we were pushing, and sure you have to push when you are down a score, especially with time up.

“When we were pushing, I think Ciaran (Collier) had a chance, Mark (Dowling) had a chance before that. Frees were hard to come by today, but look, it is what it is.”

While he and his team walk away from this game disappointed, it has still been a year to remember for the club and parish as a whole. “A brilliant year, I can't add much more than that, it has been brilliant.

“The whole club and the whole parish is looking in the one direction, trying to get Camross on top and keeping them on top. I was at Peggy Mortimer's funeral yesterday, God be good to her, and I was talking to people outside it and they were really anxious for Camross to go further, and drive on.

“There was people in their eighties wishing me the best of luck tomorrow and hoping we go well, and there was young kids of six or seven coming up and saying 'best of luck tomorrow', and that's what Camross is, young and old, all and sundry, it's brilliant to be honest.”