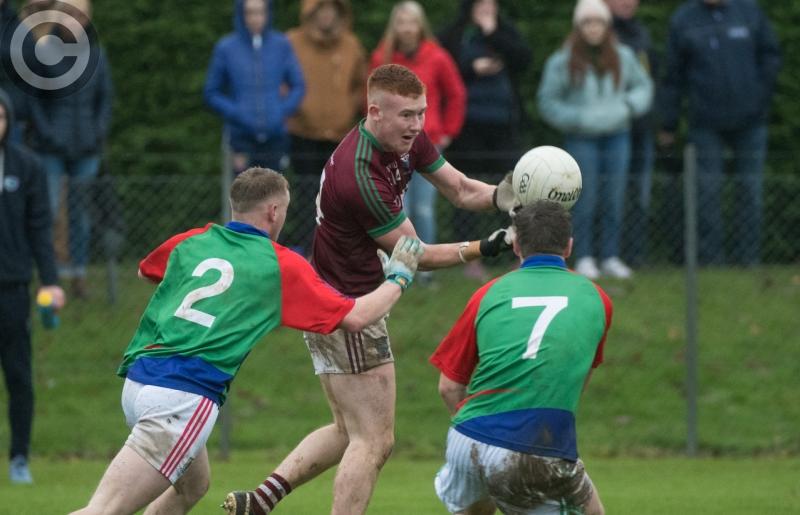 Portarlington and Stradbally Parish Gaels played out a thrilling draw the last time they met, but this one wasn’t as spectacular, as Portarlington cruised into the U-21 ‘A’ final.

The first quarter of the game was tight, but Portarlington pretty much dominated for the remainder. Liam Knowles opened the scoring for the Gaels amalgamation two minutes in, from play. Jake Foster, who came into the team for the suspended Jason Ward at corner forward, replied for his side, and Colin Slevin put Portarlington in front with another point.

Tom Shiel, who was playing with an injury, still caused Portarlington problems all game and levelled the scores soon after. Paddy O’Sullivan was denied the first goal of the game by Jack Larkin, who pulled off a save from close range.

Jake Foster was showcasing what Portarlington missed last week, adding on a further two points to his tally. However, Eoin Buggie continued his exhibition in the art of free-kick taking from the drawn game, placing over another one. Tom Shiel levelled the game once again, selling a brilliant dummy, before firing between the posts.

However, this was as close as Stradbally Parish Gaels would get to Portarlington, as the men in maroon and green five points without return to take a commanding lead. All of the five points came from different players, highlighting Portarlington’s strength all over the field. Paddy O’Sullivan, Evan Clancy, Colin Slevin, and frees from the boots of Foster and Murphy.

Shiel got one back for the Gaels, but Murphy and Foster pointed at the end of the half to leave Portarlington six points to the good.

Eoin Buggie landed the first point of the half, as Stradbally Parish Gaels went in search of a revival. Murphy slotted two points to settle Portarlington, one from play and the other a free. Shiel brought the gap back to six, but two quick-fire goals from Portarlington ended the game as a contest.

Ronan Coffey picked up the ball close to the Stradbally Parish Gaels goals, and cleverly chipped it into the path of Evan Clancy, who slid home. Stradbally Parish Gaels were then dispossessed dangerously close to their own goals, and they paid the price for it, as Murphy was brought down inside the square, and calmly slotted in the resulting penalty.

Tom Shiel responded well for the Gaels, as he collected a ball in from half-time substitute Elliot Scully, and finished past Scott Osbourne in goals.

However, there was still too much work for Stradbally Parish Gaels to do, and a free from Murphy was followed by Portarlington’s third goal, the outstanding Colin Slevin the scorer on this occasion. Slevin chased down Larkin’s attempted clearance, and got his reward, as his block ended up in the back of Larkin’s net.

The sides traded scores towards the end, with Portarlington booking their place in the U-21 ‘A’ final at the end of it. They will go in as favourites based on their displays so far this year.