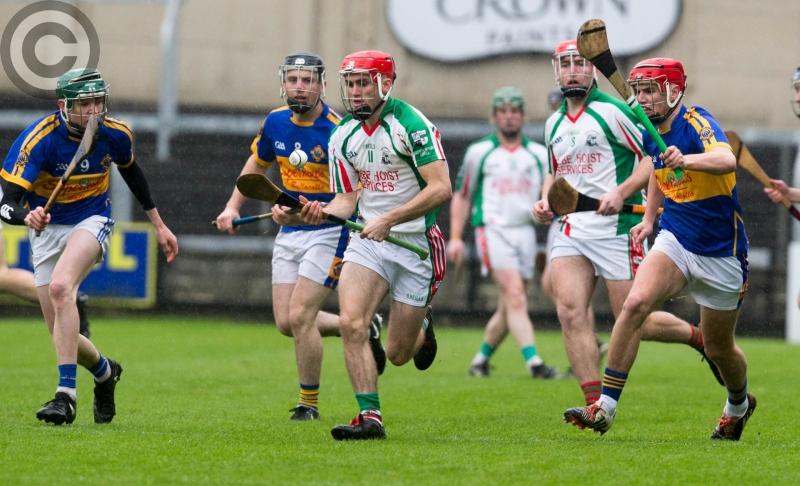 Jack Kelly on the attack for Rathdowney-Errill.

Clough-Ballacolla and Rathdowney-Errill will have to do battle again after they couldn’t be separated at the end of the U-21 Hurling Final on Saturday afternoon.

This was a really good game of hurling that produced some excellent scores despite the poor weather conditions. Clough Ballacolla finished the game with 3-13, all which came from play.

Both these teams have already suffered county finals defeats this year. Rathdowney-Errill lost the Intermediate and Junior Finals by one point while Clough Ballacolla lost the Senior Final to Camross. A lot of these players were involved in these and won’t want to suffer another such loss this year.

Both teams had periods of dominance and it was Clough-Ballacolla who couldn’t have asked for a better start as Robbie Phelan split open the Rathdowney-Errill defence with less than a minute on the clock to place the ball low past Conor Cummins.

Chris Rafter followed this up with a point and even though Paddy McCane got Rathdowney-Errill up and running at the other end with a pointed free Jordan Walshe fired over another point for Clough-Ballacolla.

Shane Bowe and McCane responded for Rathdowney-Errill with points before full forward John Dwyer added his first goal of the game for Clough Ballacolla. The score after 15 minutes saw Clough Ballacolla lead 2-2 to 0-5.

Jack Kelly responded with his second point of the game before Dwyer was at hand again for Clough Ballacolla’s second goal to as he got the rebound from Brain Corby’s shot which hit the post.

Rathdowney-Errill didn’t take long to find a response from this as McCane added another free and then set up Brandon McGinley for goal, as he placed the ball low past Cathal Dunne. Robbie Phelan added two points for Clough Ballacolla before the break, with the half time score seeing Clough Ballacolla lead 3-6 to 1-10.

Scores weren’t as easily come by in the second half but it was Jordan Walshe who got the first point of the second half. The next score was crucial for Rathdowney-Errill, as a free from Jack Kelly dropped short and was pulled on by McCane to end up in the back of the net.

It was midfieler and Laois senior Aidan Corby who then stepped up to the mark as he pointed three excellent points in quick succession to leave Clough Ballacolla ahead 3-10 to 2-10 after 50 minutes.

Jack Kelly responded for Rathdowney-Erill with a sideline cut while Paddy McCane and Jordan Kavanagh also found the target for Rathdowney Errill. Kavanagh and Jordan Walshe then exchanged scores before Aidan Corby stepped up to put Ballacolla up by a point with 60 minutes on the clock.

However, it was half-forward Shane Bowe who forced a reply as he caught a high ball turned his player and scored an excellent point from out near the sideline. Neither side deserved to lose this and will have to do it all again in the replay.