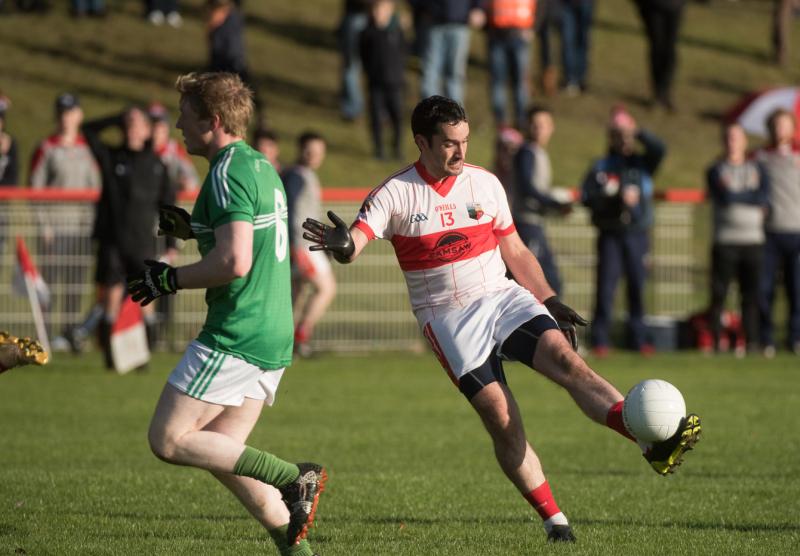 After a Herculean effort over 140 minutes of football, Emo exited the Leinster Club IFC on Saturday afternoon, as they fell to a two-point defeat to Dublin side Ballyboughal.

A fortuitous goal in the final minutes of the game was ultimately what swung it in favour of the Dublin champions, with Emo's late effort at a goal themselves thwarted by a brilliant save from the Ballyboughal 'keeper in injury time.

Emo had gotten off to a bright start, with David Gorman kicking the opening point of the game in the fourth minute, as Paul Lawlor's charges looked to make a strong start.

The response was swift from the hosts, as the impressive Gerry Seaver drew them level before Richie Downey kicked them into the lead for the first time. They were in for a goal then moments later, but David Whelan denied them with a brilliant save.

Emo started to play some nice football after that, and their strong running was drawing frees from the Ballboughal defence. Those transgressions allowed Emo to rattle off four points without reply, all from placed balls, as Paul Lawlor (2), Darren Strong and Evan Costello all hit the target.

Strong then kept them on the front foot with a point from play, with a fifteen minutes played, Emo were in the driving seat, holding a four point lead.

Gerry Seaver lead the Ballboughal comeback, as he pointed twice to offset some poor shooting by the home side. A point from Evan Costello in return left Emo in a strong position at half time, leading 0-7 to 0-4.

Emo would now face into the breeze in the second half, and Ballyboughal put the elements to use early on as they were energised after the break. Two more points from Gerry Seaver and one from Ciaran Wynne had them back on level terms, while Greg Rooney hit the crossbar for them.

Finbarr Crowley and Gerry Seaver traded points after that, and teams were deadlocked as the game headed for the final quarter.

A point from John Rodgers gave Ballyboughal the lead for the first time in almost 40 minutes of play, but Evan Costello soon restored parity, as Emo matched the home side score-for-score.

Then, a quick one-two hit from Emo, thanks to frees from Costello and Paul Lawlor, looked like setting them on their way, but it wasn't to be. An Anthony Seaver point left one in it, and then Ballyboughal got their fortuitous goal, as Ciaran Wynne's long ball went all the way to the net, as the home side's giant full-forward, Martins Prizsnova made his size tell in the square.

Emo needed a goal now in the closing stages to try and rescue something from the game, and they thought they had it when David Gorman's fisted effort seemed destined for the bottom corner, but a diving save from David Downey meant Ballyboughal held on for the win.