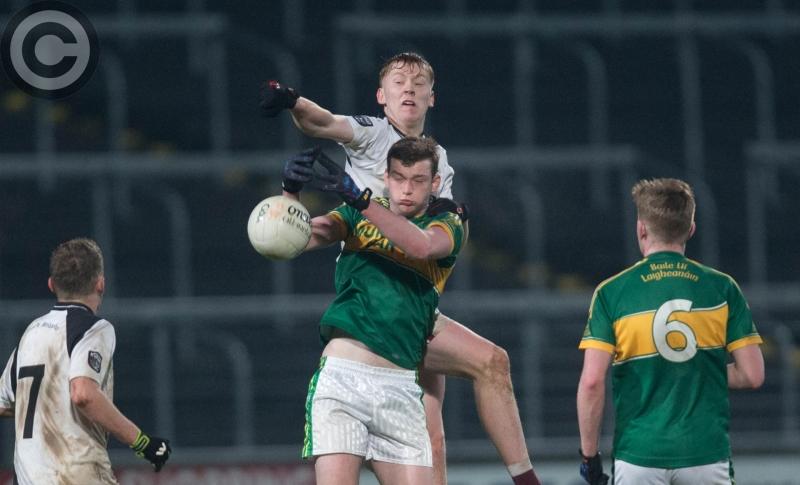 Action from the U-21 B final between Na Fianna Óg and Ballylinan. Pic: Alf Harvey.

Ballylinan are the Laois U-21 'B' football champions, after a second half comeback against Na Fianna Óg earned them a three point victory.

The amalgamation of Barrowhouse, Arles Kilcruise and Arles Killeen had been ahead with a little over a quarter of the game to go, but Andy McEvoy's goal turned the game on its head, and Ballylinan managed to battle on for the win.

The game took a while to get going, not helped by the greasy conditions in O'Moore Park, and it wasn't until the fifth minute that we had our first score. Cathail Dunne provided it, curling over a free from 30 yards out, and Ballylinan would go on to dominate the next few minutes.

Andy McEvoy, who had been so impressive for their senior team earlier in the year, extended their lead thanks to a nice effort from play. McEvoy then got his second moments later when he made room for himself on the right side of the field, cut onto his trusty left foot and sent the ball between the posts.

Less than a minute later he was pushing his team four ahead, as he scored one off his right foot, and Ballylinan now lead 0-4 to 0-0. With a little over 11 minutes played it didn't look good for Na Fianna Óg, but they showed great heart to fight their way back into the game.

The comeback started with a goal from Caomhan Brennan, when he barreled his way through the Ballylinan defence before shooting low past Aaron Baldwin.

Both teams then saw good goal chances stopped by come excellent goalkeeping, as Baldwin and Darragh Phelan showed their talents, but the next score would go the way of Na Fianna Óg, with Brennan adding a point to his earlier goal.

Not long after that Caomhan Brennan put his team in front for the first time, and within a minute Brian Malone was tapping over a free to send them two clear. Then, in first half injury time, Evan McDonald's dipping shot was tipped over the bar by Baldwin, and Na Fianna Óg lead at half time, 1-4 to 0-4.

Ballylinan got off to a good start in the second half, as Cathail Dunne's rasping shot skimmed the crossbar and went over for a point. At the other end, brilliant work from James Baldwin set up Fergal Murphy for a Na Fianna Óg point, as the goal remained between the teams.

Ballylinan were labouring to narrow the gap, but hauled themselves level in spectacular fashion in the 44th minute. Cathail Dunne's long range free was broken down by Liam O'Dea, and Andy McEvoy picked up the loose ball before rifling it into the top left corner of the net.

That score gave Ballylinan the lift they were looking for, and three unanswered points from Evan Phillips, Jak Delaney and Cathail Dunne had them three up with five minutes left.

Try as they might, Na Fianna Óg just couldn't muster the goal they needed, and Ballylinan held on for a three point win.