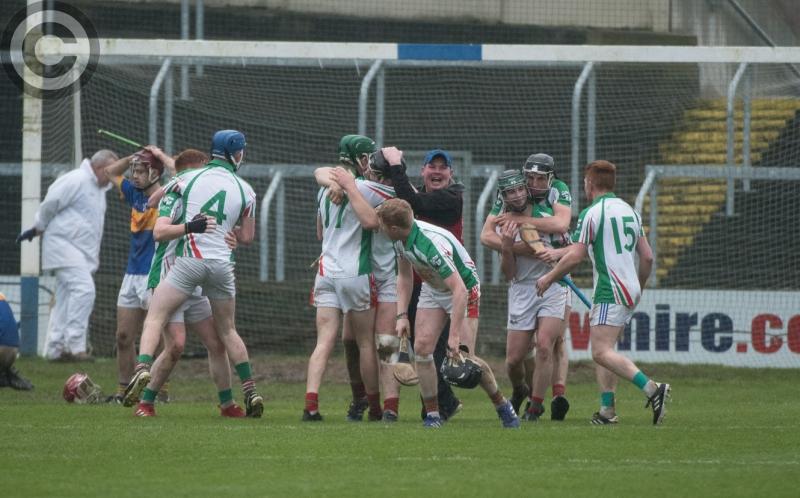 Celebrations for Rathdowney-Errill at the final whistle.

Rathdowney-Errill were crowned U-21 hurling champions on Saturday afternoon as Mark Kavanagh came off the bench to land two long-range frees in another thrilling contest, after the sides couldn’t be separated the week before.

Rathdowney-Errill trailed by two points when Kavanagh, but he held his nerve over a couple of long-range efforts after he was introduced to seal a dramatic victory for his side.

It capped off a remarkable second half in which Rathdowney-Errill lead by nine points with fifteen minutes to go, and looked to be in complete control. However, after 55 minutes it was Clough-Ballacolla who led by two points as Robbie Phelan struck for goal to inspire a remarkable turnaround, and set up a grandstand finish to the game.

Clough-Ballacolla got off to a fast start as they struck two points in quick succession thanks to Aidan Corby and Robbie Phelan. Brandon McGinley got Rathdowney-Errill up and running with a point and Paddy McCane followed up with a pointed free to leave the sides level after eight minutes at 0-2 a piece.

Both sides then went point-for-point as Brian Corby and Jordan Kavanagh exchanged scores and Jordan Walshe and Paddy McCane did likewise with frees.

Rathdowney-Errill then went four points ahead as McGinley, McCane and an excellent long range point from Jake Creagh had them leading 0-8 to 0-4 after 21 minutes.

Ballacolla pulled back the deficit before half time thanks to points from John Dwyer and Chris Rafter. The half time score saw Rathdowney-Errill lead 0-9 to 0-6.

Clough Ballacolla pressed for goal early into the second half but Rathdowney-Errill goalie Conor Cummins pulled off some excellent saves. McCane and Rafter then exchanged frees before Aidan Corby followed up with a 65’ after 40 minutes.

Jack Kelly continued to edge Rathdowney Errill out in front as he pointed to leave Rathdowney-Errill leading 0-12 to 0-8 after 42 minutes of play. Their seemed to be no stopping Rathdowney-Errill as they took complete control with Brandon McGinely firing over his fourth point of the day.

Conor Madden followed up with another point for Rathdoweny-Errill as he took a pass from Shane Bowe. Darragh Carroll then shot for a point only to see it hit the post, and then it was pulled on by Shane Madden to end up in the back of the goal. This gave Rathdowney Errill a nine point lead after 45 minutes, 1-14 to 0-8.

However, Clough Ballacolla produced an impressive comeback as Aidan Corby fired over two frees in quick succession. The same player then followed up with a point from play before Robbie Phelan struck for goal when he broke through the Rathdowney-Errill defence to place the ball into bottom corner.

Rafter added two further points and along with a Aidan Corby free there was only one point separating the sides after 55 minutes. Clough Ballacolla then went two points ahead as they struck for another goal which came off the stick of Chris Rafter.Mark Kavanagh and McCane responded for Rathdowney-Errill with frees to leave the sides level after 57 minutes at 1-17 to 2-14.

Both teams then exchanged pointed frees before deep into injury time Mark Kavanagh pointed a long range free for Rathdowney-Errill to win the game.