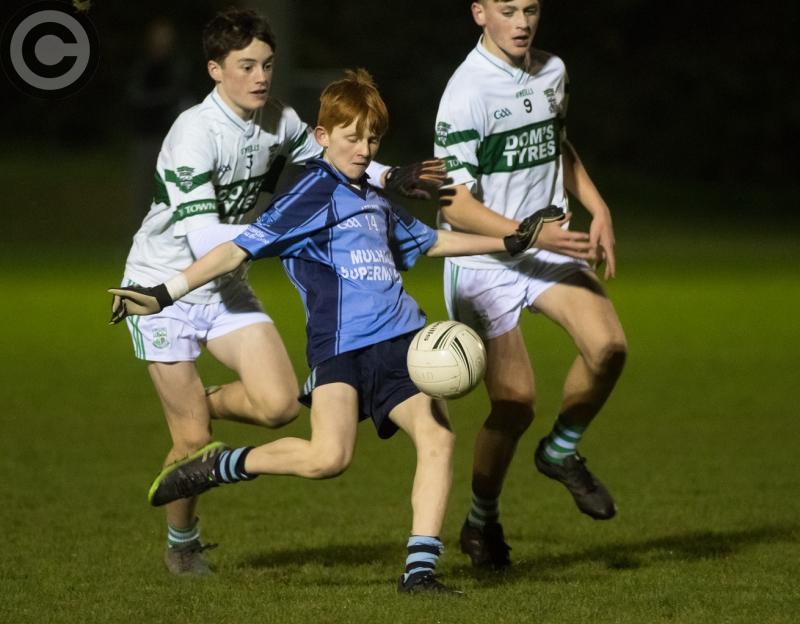 Action from the U-13 final between Portlaoise and Ballyroan Abbey. Pic: Denis Byrne.

Portlaoise, in recent times, haven’t had as much success at underage level as they’ve had at senior level, but they claimed the U-13 title in dominant fashion on Friday night.

There was a noticeable difference in physicality between the sides, which allowed Portlaoise to dominate the midfield battle and other crucial areas of the field.

Jamie O’Callaghan fired the game’s first point from play a minute in. O’Callaghan would go on to give the Ballyroan Abbey defence a torrid time throughout, showcasing his speed and skill.

O’Callaghan stretched Portlaoise’s lead out to three, before Ballyroan Abbey opened their scoring for the day with a Colm Byrne free.

Conor Raggett hit straight back for Portlaoise with a point to regain the three point lead. Ballyroan Abbey were guilty of missing a number of chances in the first half, and were not helped by Portlaoise keeper Brochan O’Reilly not letting anything past him. O’Callaghan scored Portlaoise’s fifth of the half to leave them up by four at the break.

The game’s first goal came at the beginning of the second half, and it went the way of Portlaoise. Connor Raggett found himself in the Ballyroan Abbey square with ball in hand, and rifled it past Ciaran Collins to the roof of the net.

Dylan Cahill and Colin McEvoy pushed the Portlaoise lead out to nine, as Ballyroan Abbey desperately needed a score to settle them down. They came close to raising a green flag, but Darren Mulhall saw his shot off the ground incredibly saved by Brochan O’Reilly leg.

Colm Byrne did manage a free for Ballyroan Abbey, but Portlaoise well and truly put the game to bed with five unanswered points.

Jamie O’Callaghan and Dylan Cahill pointed twice in a five minute spell, with Colin McEvoy adding one on as well. Colm Byrne pointed his third free, but Ballyroan Abbey failed to score from play on the night.

Portlaoise put the icing on the cake with a second goal. An excellent kick-pass from Dylan Cahill, who Ballyroan Abbey struggled to compete with because of his size, was caught by Lee Smith, who could not miss from close range.