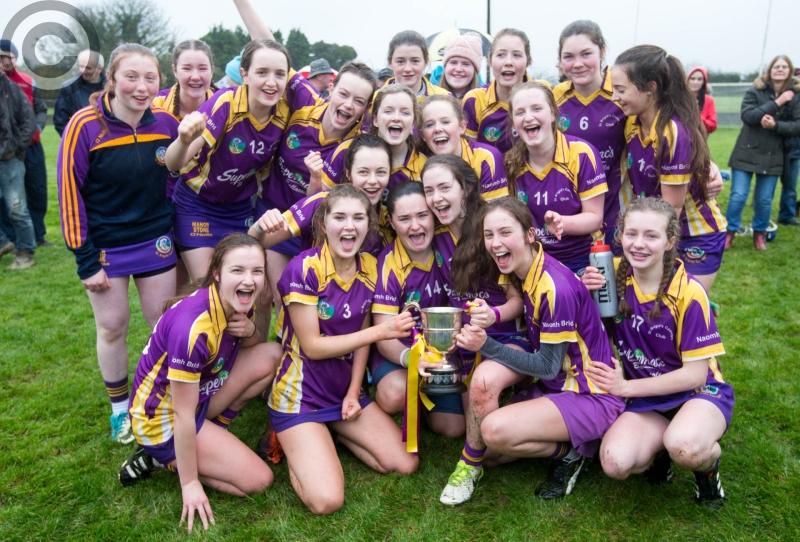 Three first half goals from St Brigid's saw them to the Laois Minor 'A' Camogie title on Saturday morning against a spirited Camross side in Rathdowney.

The Pat Delaney and Owen Coss trained side stunned Camross with that early barrage, and it proved the winning of the game, although they were forced to hang on for dear life towards the end when Camross launched a late siege on their goal.

Wing forward Alannah Tynan started the goal glut for St Brigid's, with Grainne Hoare registering the second and Zoe Daly the third, all within the space of fifteen minutes, to put them firmly in control of proceedings.

Camross were reeling, but managed to rattle off four points before half time, three from Kirsten Keenan and one from Aine Cuddy to trail by eight points at the interval, 3-3 to 0-4.

The second half saw scores a little harder to come back, and much of that was down to the excellent goalkeeping on display from Emma Dunphy and Aedin Lowry.

Jessie Quinlan's excellent free-taking kept St Brigi'd on the front foot, although Camross were right in the hunt in the closing stage, as centre-back Aimee Collier, now at centre-forward, scored a goal to get them some reward towards the end.

However, with Emma Dunphy in defiant mood, St Brigid's held on for a well-deserved victory. Player of the Game was Clodagh Tynan, while Jessie Quinlan, Shona Jones and Dunphy impressed for Brigid's, with Kirsten Keenan, Aimee Collier, Aine Cuddy and Aedin Lowry catching the eye for Camross