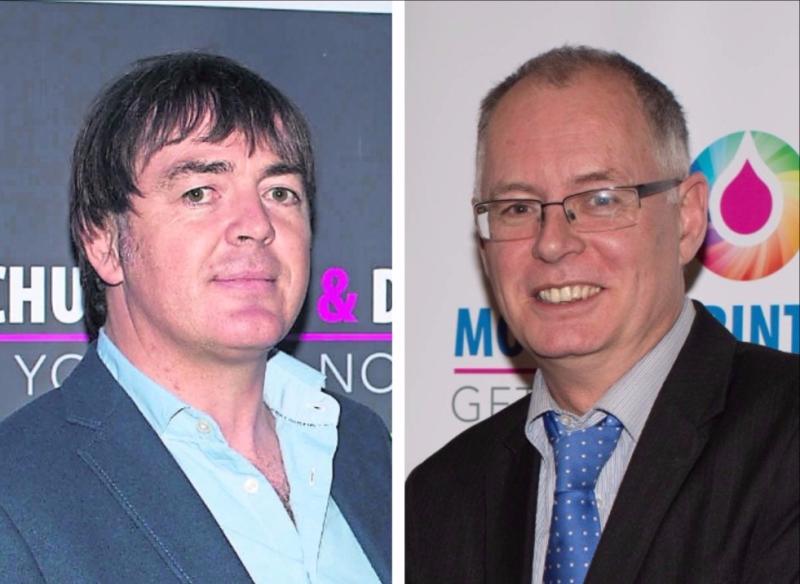 Kieran 'Shaggy' Leavy, left, and Peter O'Neill will go head-to-head to be the next Laois GAA Chairman.

Next Monday night, Peter O'Neill and Kieran Leavy will stand before a packed ballroom in the Midlands Park Hotel, and tell everyone there why they should be the next chairman of Laois GAA.

For one, it will be the culmination of a marathon journey, while for the other, a final dash for the line in a sprint finish.
O'Neill declared his candidacy back on October 1, when he confirmed to members of the local media at the Laois SFC semi-finals of his desire to replace Gerry Kavanagh.

Leavy, on the other hand, was announced as a candidate on November 16, but demurred from confirming whether he would actually run until a little after 8pm on Wednesday night, when he informed local media he would contest the election against O'Neill, after Brian Allen and Sean Mortimer had pulled out.

It was a rather low-key entry from a man known for being a larger-than-life character, and he appears to have left himself with a huge task in canvassing support ahead of the election on Monday. He only has five days, and with 150 or so votes available on the night, he'll have to make around 30 calls a day if he wants to talk to everyone who has the right to cast a vote.

O'Neill, meanwhile, has had two months to contact clubs, make promises, give assurances, meet with anyone who has the potential to offer him a vote, and outline to them his vision for taking Laois forward. It's a big advantage, but Leavy has shown himself adept at pulling in votes in the past, so even with the late announcement, the outcome is far from a foregone conclusion.

Like all elections, both candidates have their pros and cons, and the fascination lies with which of them the delegates choose to place their trust in, at what is a critical juncture for Laois GAA.

O'Neill will be seen as more of an 'established' candidate, possibly even a safer candidate, having been knocking around the county board for about 15 years now. He has held a variety of roles at board level, been in charge of organising and running national Féile's, and has also thrown his weight behind the efforts to save Portlaoise hospital.

That last point, in relation to the hospital, is sure to gain him some traction in many areas. He has been putting his shoulder to the wheel for the county for a long time, and that is a big tick in his favour when it comes to the vote on Monday night.

However, he has many obstacles to overcome too. For starters, rightly or wrongly, many perceive him to be arrogant, maybe even aloof, and he does not have universal support, as was shown last year when he lost the vote for vice-chairman. However, by declaring early, he has given himself time to claw back some of the support he lost.

In fairness to him, he was visibly crestfallen after that loss, but clearly feels he has something to offer the county. Instead of walking away in a huff, he got back involved and is now putting his neck on the line again.

While that is a mark in his favour, he is also faced with two problems about which he can do nothing - he is from Offaly, and he's a member of Portlaoise.

Originally from Edenderry, the idea of an Offalyman leading Laois GAA won't sit well with some people in the room next Monday.

Since he moved here he has been involved with Portlaoise GAA Club, and this too won't help him in the eyes of some clubs, particularly those on the outskirts of the town. They have started to lose players to Portlaoise once more despite efforts to protect them through amendments to the transfer byelaws, and they may not like the idea of a chairman who they feel would not protect their interests.

He also lost a lot of support around the time of SFC debacle in 2014 for the manner in which he chaired a number of meetings, and clubs and delegates will have remembered that.

He will also be seen as a 'More Of The Same' candidate, and at a time when Laois GAA has been in freefall on the playing fields, that's not good. He will have to be very clear in how he hopes to address the problems the county faces, and what he will do differently, if he is to win over the voters.

For Kieran Leavy, or Shaggy, as he is more commonly known, he too has a job on his hands to convince enough people to trust him with the biggest job in Laois GAA.

To many delegates, he has probably seemed like a novelty act at times, sitting at the end of the top table at county board meetings, delivering a few one-liners or laughing and joking with those present.

He can be brash and impulsive, as his comments earlier this year about forcing children to pick GAA over other sports suggest, and delegates will be wary of why he took so long to decide whether he wanted to go for the job or not.

It would be a massive jump to go from Assistant Treasurer to Chairman also, and while he has polled well in the past in elections for Leinster Council Delegate and Assistant Treasurer, it is another matter entirely to get the same support for a role of this magnitude.

The clubs might trust him to carry out a job with a relatively limited scope like those he has held to date, but it remains to be seen if they will trust him to be the overseer of all the various workings of the county board.

Traditionally the GAA, as a body, is quite conservative, and Leavy would not be seen as a conservative candidate, so he will likely not appeal to many of those in the hall on Monday for that reason.

However, in spite of all that, his background in business (he runs his own security firm) will be seen as a big positive, especially as Laois have just taken out a loan of €1.23m to finish the work on the Training Centre, and the county has some big challenges ahead to raise the money needed to service that loan.

He has also brought a lot of money into the county through both his fundraising efforts and securing sponsorship, and that will be another tick in his favour. He will likely poll strongly in his home club and surrounding areas, but it's harder to call when you head away from the home areas of both candidates.

That brings us to another area that will play a massive part in this election - the hurling clubs.

O'Neill has repeatedly stated he is not a 'football man' and instead a promoter of both codes, but the perception remains out there that he is primarily interested in football. He has, after all, been the chairman of the Football Committee for some time.

Leavy, likewise, coming from Portarlington, is a 'football man' in the eyes of the hurling fraternity, and there will rightly be concerns among the hurling clubs about which of the candidates will take as much interest in the game as they do in football.

Whichever of O'Neill and Leavy can win the trust of the hurling clubs will likely win this election.

How they appeal to hurling clubs, and indeed all clubs, is quite simple to identify, but incredibly complex to address when elected.

The issues facing the county are obvious and widespread. Laois football is at it's lowest ebb in generations. The senior hurlers have been relegated from Leinster without playing a game. The club football championships need to be revitalised. Interest in Laois GAA is fading away right around the county. Financial pressures are mounting and have to be addressed. Apathy is rampant.

For much of this race, when Allen and Mortimer were in the mix, Peter O'Neill looked the favourite to win. Now that it is a two-horse race, it is less clear-cut.

A huge decision awaits the delegates at next Monday night's Laois GAA Convention. However, that pales in comparison to the scale of the job awaiting the winner.