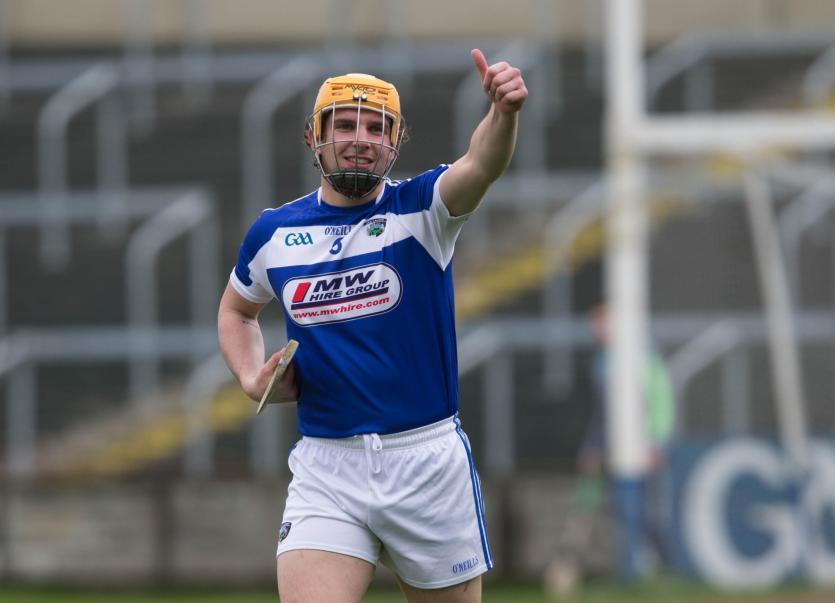 Cha Dwyer will be a key player for Laois in this year's NHL Division 1B campaign.

The Laois senior hurlers begin a daunting NHL Division 1B campaign this Sunday afternoon in the Gaelic Grounds against Limerick, as they look to avoid a repeat of last year's relegation playoff.

At the outset, this Laois panel already seems to be up against it, as they play two of the strongest teams in the Division in their first two games, and then head into two must-win games against Antrim and Offaly directly after that.

As ever with the hurlers, effort and honesty won't be lacking, but experience sadly is. Last year's panel was probably one of the youngest senior squads to ever convene in this county. This year, they are even younger, as injuries to key players has forced Eamonn Kelly to turn to ever younger players to join the group.

At present, four of the panel are studying for their Leaving Cert, a remarkable number in the modern game, and a raft of other players are having to juggle Fitzgibbon Cup commitments with intercounty hurling.

The list of injuries is hampering preparations in a big way, with a number of the more experienced players in the squad having to watch from the sidelines for the foreseeable future.

Cahir Healy, Mark Kavanagh and Picky Maher are out with cruciate ligament injuries, while Dwane Palmer is recovering from a broken leg suffered after the county final. PJ Scully and Ryan Mullaney are also out long-term, while Cha Dwyer is not 100% fit, and playing both league and Fitzgibbon Cup won't give him much chance to recover properly.

Leigh Bergin is trying to overcome a hamstring injury and Ross King has had his involvement limited in the pre-season competitions, so he too is trying to get back to full fitness.

The majority of those players hold the bulk of the experience in the squad, and Healy's loss in particular will be keenly felt. He is very vocal on the field and plays the game in a manner which demands the most out of the team mates around him.

Picky Maher's size will be another big loss from the half-forward line, and as was witnessed in the Walsh Cup game against Kilkenny, Laois really need men on the field who can win primary possession.

That is going to be one of their biggest challenges in this league, particularly in the opening two games. Limerick await Laois in Round 1, and the game between them last year in O'Moore Park was tough viewing for the home fans.

Limerick, like Galway and Dublin, will feel Division 1A is their natural environment, and so will be looking to make a bright start against a Laois side which, currently, looks ill-equipped to deny them such a beginning.

Across the Division, however, this looks like a much tougher task than last year. In essence, Division 1B breaks down into two groups of three, with Galway, Dublin and Limerick all battling for top spot, and Laois, Antrim and Offaly all looking for fourth, thus avoiding relegation and securing a place in the quarter-finals.

While last year threw up an Offaly team which near enough imploded against a strong Laois challenge in O'Moore Park, Kevin Martin's appointment seems to have breathed life into the Faithful county.

Where players once walked away in droves, they are now returning in similar numbers. Colin Egan, captain in 2016 when Eamonn Kelly was in charge, walked away in 2017, but has now returned for this year. Dan Currams, the current Offaly Senior Hurler of the Year, is also back in the fold, while Conor Mahon, Derek Morkan and Derek Molloy are also pulling on the jersey again.

That makes them a much tougher prospect this year, and as the players joining the panel are seasoned intercounty players, it hands them an advantage over Laois.

Antrim, coming up from Division 2A, will be seen as one game Laois absolutely should win, but again, it is not as straightforward as it seems. Terence McNaughton has been there as manager for three years, and this season he has been aided by former All-Ireland winning Tipperary boss Liam Sheedy. He has been present at most of their practice games so far, and visits with the camp every three weeks or so, offering guidance.

Antrim, like Laois, are trying to bring through a number of new and young players, but history has shown they invariably give Laois a right good rattle, and it will be no different this time around, although Laois at least have home advantage.

Galway, who won more or less everything available to them last year, will be expected to top the group, although the same was expected last year too. Unless there is a significant hangover from the All-Ireland victory, it's hard to see them not topping the group, and Laois' clash with them in Round 2 will probably be the toughest of the five games.

Dublin round off Laois' list of opponents, and Pat Gilroy's appointment, while something of a surprise, has resulted in a significant upturn in the county's fortunes, at least when it comes to assembling a panel.

Much like what has happened in Offaly, Dublin have been welcoming back a significant number of their better players, as John McCaffrey, Danny Sutcliffe and Conal Keaney have all been suitably convinced to return to the fold by Gilroy.

All of that means there is very little margin for error for Laois in any of their games. Starting against Limerick and Galway is very tough, considering two one-sided defeats could transpire and confidence could be knocked before the must-win games against Offaly and Antrim.

One area Laois really need to improve on is securing primary possession, and that won't be helped by the youth and inexperience in the squad. Players like Paddy Purcell, Neil Foyle and Ross King will have to be at their very best, every game, to keep Laois in the hunt in the upcoming matches.

Equally as important is goalkeeper Enda Rowland. His puckouts will have to be very accurate, and he simply can't launch balls in the direction of Laois men and hope for the best. They have to be on target and they have to give the Laois man every chance of winning possession.

Laois took an extended training period over winter to lay down a strong fitness base, as well as trying to bulk up a small panel, so that has probably left them a little behind when it comes to hurling.

The first two games will be a chance to get their eye in, however difficult that may be, but they will have to hope that they are in good shape for the two games which follow. A good league campaign for Laois would be to avoid relegation to Division 2A.

Whether that's by finishing fourth or winning the relegation playoff remains to be seen, but the end-goal has to be to just keep their place at this level so this team can develop while playing a high standard of hurling.