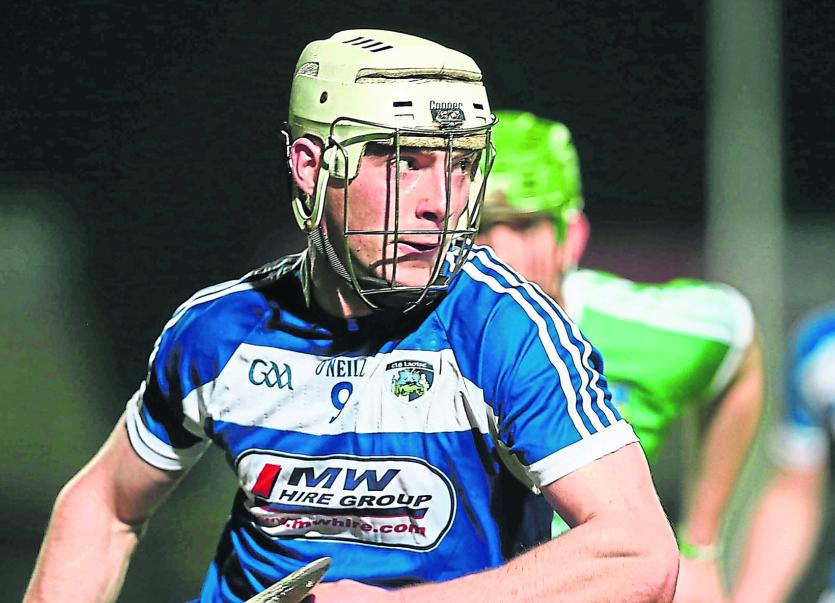 Ben Conroy in action for Laois.

Laois opened their NHL Division 1B campaign with a ten point loss to Limerick in the Gaelic Grounds.

Lead by the free-scoring Aaron Gillane, Limerick surged ahead thanks to a first-half goal from Gearoid Hegarty, and while Laois provided stubborn opposition, they never got close enough to trouble the home side.

Already facing a lenghty injury list before this game, Laois lost Cha Dwyer before the throw in, and then saw Lee Cleere hobble off in the first half. They have little time to recover, as Galway pay a visit to O'Moore Park next Saturday night.

Laois made a bright start, taking an early lead thanks to a Cian Taylor point, but Aaron Gillane had that canceled out within a minute. Gillane then added another free after a foul on Tom Morrissey, but Laois goalkeeper Enda Rowland leveled the scores when he came up to take a 65 yard free into the breeze.

Limerick's first sign of flexing their muscles came after that, as two in row from Cian Lynch and Diarmuid Byrnes pushed them into a two-point lead. Paddy Purcell responded for Limerick, but Gillane (free) and Lynch hit the target again as Limerick kept up the pressure.

Laois, to their credit, responded well as captain Ross King nailed two frees to get them back within one, but Limerick put daylight between them after that. Gillane scored another free, with Laois losing corner-back Lee Cleere in the process as he fell awkwardly. Not long after that, Limerick carved open the Laois defence and Gearoid Hegarty finished the move with a goal from close range.

Ross King lifted Laois heads after that with another free, before traded points with Limerick captain Paul Browne, four points now the difference.

If Laois could have kept it to that coming up to half time it would have been a decent half, considering they were playing into the wind, but Limerick hit four unanswered points before the interval to lead 1-12 to 0-7 as the teams headed for the dressing rooms.

Laois would have wind advantage in the second half, and again they started the half brightly with Ross King scoring an early free. However, Limerick hit back with a quick-fire double to go nine ahead, and that was pretty much the way the second half played out, as Laois occasionally tried to make inroads into the Limerick lead, but John Kiely's charges comfortably held them at arms length, and with Gillane and Tom Morrissey picking off scores whenever they needed them, they ran out comfortable winners in the end.