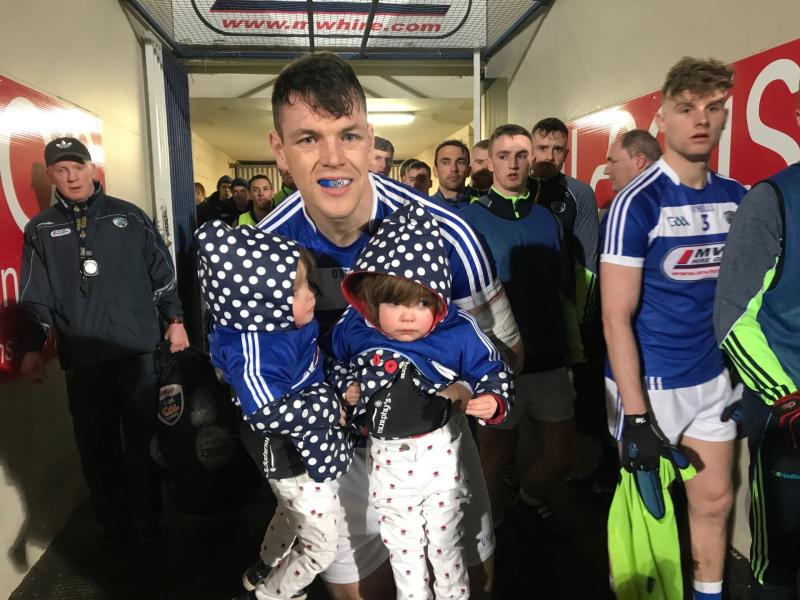 John O'Loughlin, making his 100th appearance for Laois, with Anna and Edie Fitzgerald, his twin nieces, before the game with Waterford.

Laois footballers maintained their 100% start to their NFL Division 4 campaign with a four point win over Waterford in O'Moore Park on Saturday night.

Waterford jumped off to a bright start, with full-forward JJ Hutchinson kicking the opening two scores. It was a tough night for football, with a strong crosswind blowing from the stand side of the pitch towards the terrace, which made things tough for both sides.

Laois slowly worked their way into the game, and Gary Walsh pointed two frees either side of an Alan Farrell effort to see them take the lead. Waterford remained cool in the face of Laois' revival, and Hutchinson flicked over his third point of the game to level it, before they struck for the opening goal.

Conor Murray appeared to be well contained in the left corner-forward position by the Laois defence, but he managed to pick out Hutchinson ten yards out with a brilliant ball, and the Waterford man kept his cool with a low finish.

Having bossed their opening two games, for the most part, Laois were really struggling to deal with Waterford. At times they looked unsure in possession, but they managed to work through it, and after the goal they responded really well. Gary Walsh pointed a free, and then Paul Kingston rounded off a good move after a great burst forward from Gareth Dillon.

Kieran Lillis then kicked the equaliser, but a Jason Curry free moved Waterford back in front with six minutes to go to half time.

Laois needed a response, and they duly provided it before the half time whistle sounded. Walsh slotted over his fourth free of the half, before some neat passing set Ross Munnelly up 35 yards out, and he made no mistake. Laois were far from their best in the opening half, but still lead 0-8 to 1-4 at the interval.

The second half saw the return to action of Donie Kingston, but it was Wateford who struck first, with Jason Curry leveling the scores. Laois had retaken the lead within a minute, as Gary Walsh pointed from close range, before Ross Munnelly curled over a free to edge them two ahead.

Every time Laois strung a passage of play like that together you felt that might be enough to see them kick on, but again Waterford reeled them back in. It was Jason Curry who did it, as he curled over a free and then kicked one from play to level the scores at 0-10 to 1-7.

Again, Laois pushed ahead from there, with Gary Walsh pointing twice in succession. Conor Murray responded for Waterford, but Laois were finally starting to find some fluency, and they kicked the next six points on the trot to break the Waterford resistance. Donie Kingston kicked two wonderful points in that spell, with Gary Walsh also to the fore, as Laois maintained their 100% start to the league.