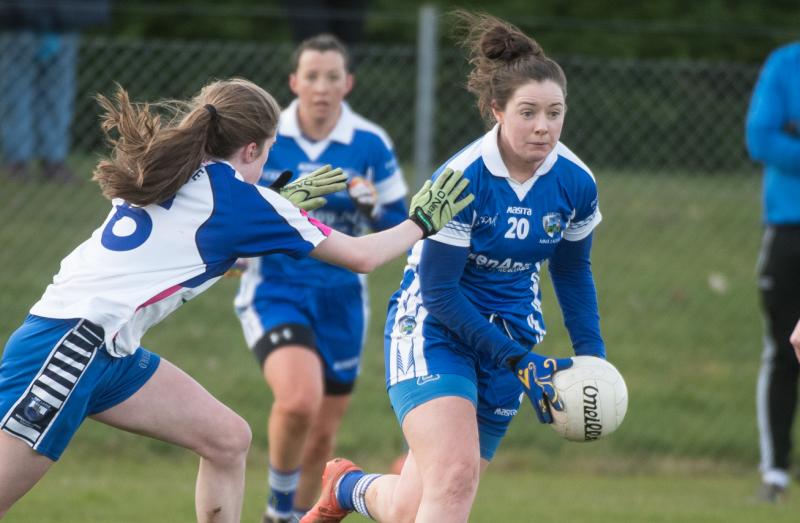 The Laois Ladies footballers fell to their third successive defeat of their league campaign at the weekend when they lost out to Waterford by eleven points on a miserable afternoon in Ratheniska on Sunday last.

Having opened the campaign with a first round defeat to Cavan, followed by a heavy defeat away to Tipperary last weekend, Laois were looking to pick up their first points of the season when Waterford visited Ratheniska - but it wasn’t to be.

With an intermittent wind behind their backs in the opening half, Laois trailed by three points at the half-way mark and were three points down entering the final ten minutes of the game. A late Waterford flurry of 2-3 in the final six minutes, with the goals coming in the fifty-ninth and sixty-first minute respectively, lent to a glossed eleven point victory for the Deise Ladies.

It took until the sixth minute for either side to acclimatise to the bitterly cold conditions, and it was Laois that registered the opening score of the game through a Clare Conlon free from forty metres out. It was to be short-lived though as the visitors replied with three points in as many minutes from Eimear Fennell, Lauren McGregor and Sinead Ryan to see Waterford take the lead inside ten minutes.

A darting run from Erone Fitzpatrick afforded Conlon her second of the afternoon, although she could only watch on as what looked to be her third point was denied by the crossbar as Laois still trailed by one. Laois got on level terms shortly after through Noirin Kirwan, but Waterford captain Mairead Wall was on hand to edge her side back in front on the quarter of an hour mark.

Laois struck the opening goal of the game with twenty minutes played when Emma Lawlor cleverly played a quick one-two with Conlon from a short-range free before finishing across the goalkeeper to lift the green flag and put Laois in front.

Waterford closed out the half strongly with with 1-2 of their own with Liz Devine, sister of Waterford hurling star Tom, providing the finish for the goal to see them lead on a scoreline of 1-6 to 1-3 at the interval.

Laois were given a boost shortly after the restart when Waterford were reduced to thirteen players following yellow cards for Maria Delahunty and Lauren McGregor, despite this Waterford increased their lead to four through substitute Aileen Wall who had been introduced less than a minute previously. A minute before the duo’s return from the sin bin, Laois capitalised with Emma Lawlor grabbing her second goal of the day to bring Laois to within a point with fifteen minutes left to play.

A minute later, Eimear Fennell grabbed her first of a fifteen-minute hat-trick and while Lawlor clipped off another point, Waterford took the reigns to finish strongly with 2-3 in the final minutes. Fennell completed her hat-trick in the first minute of injury-time aided by points from McGregor, Wall and Delahunty.

Laois finished with a consolation point from Mags McEvoy as they remain bottom of the division with three rounds played.