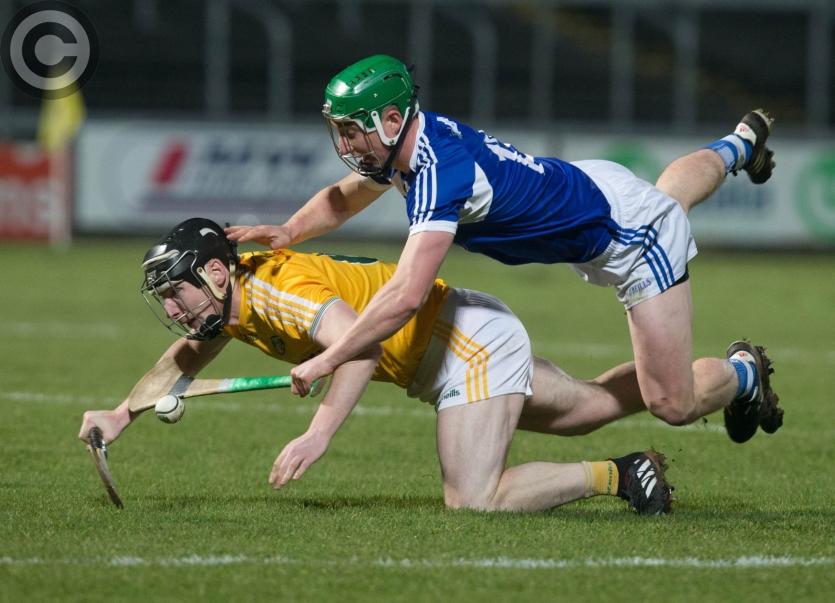 Laois recorded a crucial NHL Division 1B victory on Saturday night, as they beat Antrim by five points in O'Moore Park.

With Ross King in deadly form up front and a good spread of scorers over the field, Laois just about did enough to see off a determined Antrim outfit.

Laois started brightly with Cha Dwyer getting the first score, but four wides in the opening four minutes denied them the chance to build early momentum. Antrim took advantage, and the excellent Neil McManus rattled off four points without reply, two from play and two from frees, to see the visitors lead 0-4 to 0-1 after 12 minutes.

Laois finally atoned for their wasteful start after that, as captain Ross King brought them level with three pointed frees, and then Cha Dwyer put them back ahead. Neil Foyle and King (free) kept Laois on the front foot, with McManus again leading the response for Antrim with another free.

That set up an entertaining first half, with both teams picking off some impressive scores. James Ryan and Ciaran Comerford landed two good scores for Laois, while a brilliant run down the right wing from Nigel Elliott ended with a wonderful point from a tight angle.

The last five minutes of the half belonged to Laois though, and they scored four in a row before Johnny Ryan blew his half-time whistle. All the scores came from frees, with King and goalkeeper Enda Rowland landing two each to see the home side lead 0-13 to 0-8 at the interval.

Laois kept up their impressive form when the second half got underway, and lead by King's free-taking and points from midfielders James Ryan and Paddy Purcell meant that they lead by double scores at 0-16 to 0-8 after 42 minutes.

Antrim needed something to kickstart their challenge, and substitute Eoghan Campbell provided it. He got on the end of a free into the area from Neil McManus and rattled Enda Rowland's net to give his side a timely boost.

Laois responded well though, and with King unerring from placed balls, they kept themselves a couple of scores ahead at all times. Antrim got another goal late on from Nigel Elliott, but two more points from King saw Laois to a much-needed win.