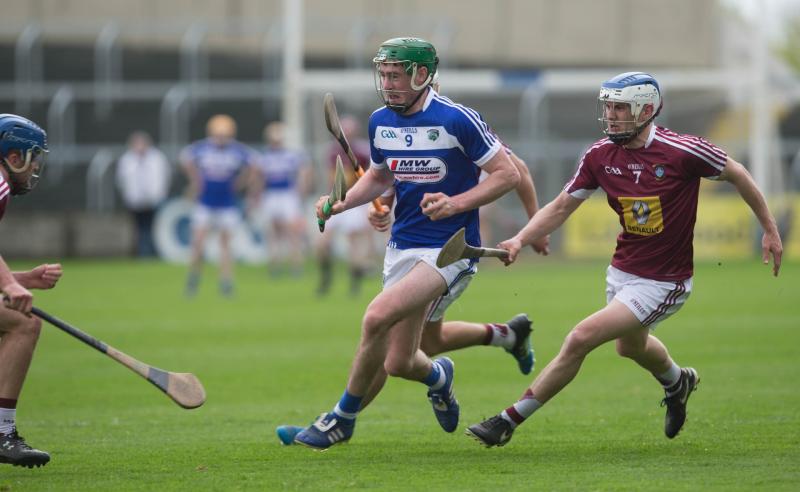 Laois suffered a five point loss to Offaly in their NHL Division 1B clash in O'Connor Park today, as sloppy display proved costly.

Eamonn Kelly's charged never showed the skill or intensity they managed in their previous games against Limerick, Galway and Antrim, and were made to pay by a strong second half display from Offaly.

Laois had jumped off to a bright start, with Paddy Purcell pointing after only 12 seconds of play, as Laois enjoyed the wind advantage in the first half.

Nearly five minutes would pass before Laois registered another score, and that was a booming free from his own 45 yard line by Enda Rowland. Laois were on the front foot now, but they would cede the initiative to poor shooting, poor control and a number of poor decisions.

Paddy Delaney opened the Offaly account in the ninth minute, and a Shane Dooley free soon after leveled the scores. Then, a moment Laois had been waiting for over 210 minutes for finally arrived, their first goal in the league this year.

It was a well-worked move, as Paddy Purcell fed Ross King in the left corner, he played it to Ben Conroy and Conroy then worked the ball back to Purcell. He was cutting in from the left wing, and he rifled a shot into the far top corner.

That should have been the jolt awake that Laois needed to press ahead and take control of the game, but Offaly canceled the goal out in the ensuing minutes. Shane Dooley pointed a free, before a poorly taken sideline cut from Cha Dwyer allowed Offaly to break forward, and Tommy Geraghty fired over the bar.

Joe Bergin then leveled the scores after winning a high ball into the full-forward line, and Offaly's recovery was complete when Cillian Kiely put them ahead.

Willie Dunphy got his first score of the half after that as Laois kept themselves in the mix, but they were making too many mistakes to either limit Offaly, or pull ahead themselves. Dooley (free) and Padraig Lawlor traded points to keep the team level, and that was the way the first half played out, with both teams picking off scores, but neither really doing enough to open up a gap.

They were level at 1-7 to 0-10 on the stroke of half time, but poor Laois defending allowed Tommy Geraghty to score his second point, and Offaly lead by the minimum at half time.

Much like the first half, Laois got off to a bright start in the second as Ross King leveled the scores with a free, and then sub Mark Kavanagh pushed Laois in front with a sideline cut. The Offaly response was swift and clinical, as David King and Joe Bergin pointed from play, Shane Dooley tapped over a free, and then Bergin lashed home a goal from the edge of the penalty area.

Dan Currams added another, and Offaly now found themselves six clear with Laois looking in real trouble. Ross King pointed a free from close range to try to break the Offaly momentum, but it make little difference, as Laois were struggling to deal with direct ball into Joe Bergin.

He, and Shane Dooley, accounted for the next five points for Offaly, as Bergin hit two from play and Dooley added three from placed balls, as the lead now swelled to nine.

Laois did rally after that, and a run of three points without reply narrowed the gap to six, but they never threatened to get the goals they needed, as Offaly ran out comfortable winners in the end.