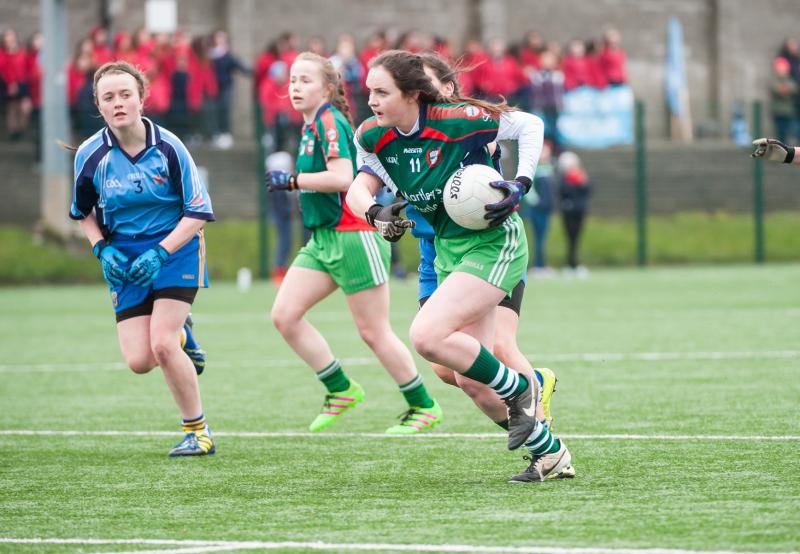 Scoil Chríost Rí's hopes of All-Ireland glory were dashed in Heywood today, as they lost out to a strong Loreto Clonmel side by eight points.

The Portlaoise school were dominant for long spells, and the eight point deficit probably doesn't do justice to how close the game was, but there could be no doubting at the end that Clonmel were worthy winners.

They managed to find another gear with a little over ten minutes to go to put some daylight between the sides, and Chríost Rí just couldn't bridge the gap. In truth, from there point of view, the opening stages were the most costly. They were by far the better side in the opening ten or fifteen minutes, but were far too wasteful in front of goal.

They will be left to rue those misses, as well as some sloppy passing, an aspect of their play which came back to haunt them time and again, but it has still been another remarkable season for the school. It is testimony to the standards they have set, that they will look back on Leinster final appearance for their junior team, and an All-Ireland semi-final appearance for the seniors, and feel as though it hasn't been a success.

As stated earlier, they were by far the better team in the opening stages, without making it count on the scoreboard. Erone Fitzpatrick who shipped a lot of punishment throughout the game, missed an early chance for a point, with Jenny O'Neill also seeing a goal chance go to waste.

They did open their account in the third minute, as Emma Lawlor set up Erone Fitzpatrick for the game's opening score. Soon after that, a lovely team move ended with Sarah Larkin kicking a fine point to push them two ahead.

Loreto Clonmel weren't causing them much trouble at this stage, but Portlaoise were causing themselves problems. Loreto were defending well and forcing them into mistakes, as too often Portlaoise looked to force a pass that wasn't really on. Clonmel eventually got their first score in the tenth minute, Jenny Everard kicking a free.

The Chríost Rí response was clinical, as Emma Lawlor put a ball through for Erone Fitzpatrick to chase and her volleyed finish flew into the net.

That gave the Portlaoise girls a massive boost, but they had all of a minute to enjoy it, as Clonmel hit back in fine style. Anna Carey was played in down the right wing, and she bore down on goal before lashing a shot into the far top corner. A point from Carey moments later had the teams level at 1-2 each after 18 minutes.

The rest of the half was closely fought, with the only talking point being that both teams were wearing green jerseys, which caused plenty of problems. Scoil Chríost Rí played with their jerseys inside out for the second half.

The opening stages of the second half remained a cagey affair, with Laois senior star Emma Lawlor pointing two frees for Chríost Rí, and Clonmel responding with a brace from Ava Fennessy.

Clonmel started to open up a gap between the teams after that, as a run of three points without reply pushed them into the lead, and then came a crucial score. Chríost Rí coughed up possession from their own kickout and Clonmel launched a high ball into the penalty area. Goalkeeper Aoife Hyland misjudged the ball and it fell kindly for Anna Carey to slot home her second goal.

Kellyann Horgan added a free and Loreto were now seven ahead, and Chríost Rí had a mountain to climb. Erone Fitzpatrick and Emma Lawlor pointed to settle them down, but Clonmel match them score-for-score after that until Fennessy got their third goal in the last minute of normal time.

Chríost Rí hit back within a minute as Emma Lawlor rounded off a good move with a goal, but Clonmel defended resolutely after that to deny them any more clear-cut chances, as the Tipperary girls sealed their place in the All-Ireland final.