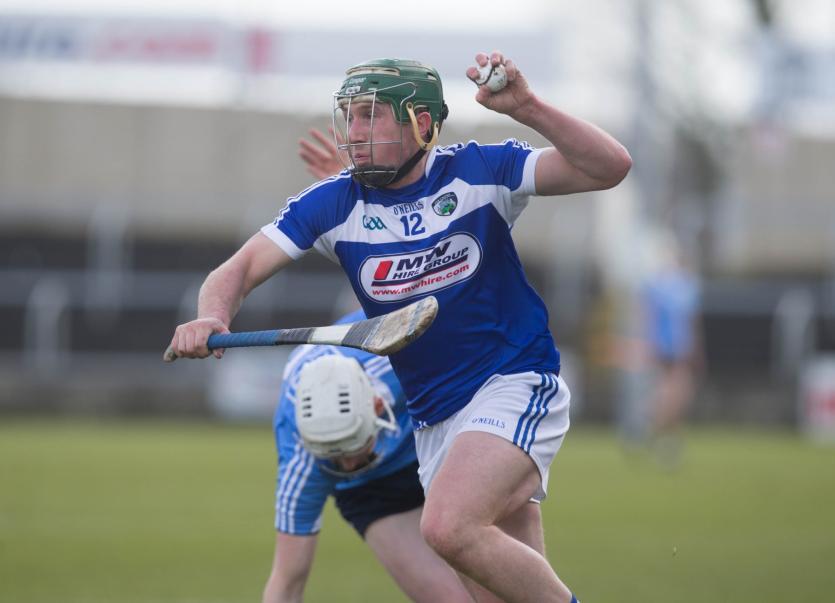 Willie Dunphy on the attack for Laois.

Laois senior hurlers are now facing a trip to Antrim to secure their NHL Division 1B status, after they were soundly beaten in O'Moore Park today.

In by far their worst performance in the league this year, they were outclassed by a Dublin side minus their Cuala contingent. Dublin lead by 1-10 to 0-2 with a little over 20 minutes played, and Laois had to endure the remaining 50 minutes as the Dubs strolled to victory.

The warning signs appeared early for Laois, as Dublin corner-forward Paul Winters was allowed run straight through on goal in the second minute, but he put his effort wide. Donal Burke did open their account moments later, and Ronan Hayes quickly doubled it.

Laois were getting outmuscled around midfield, particularly on puck outs, and Dublin kept a steady stream of possession going into their forward line. Conal Keaney pointed from the right wing to put them three up, and then another soon followed from Ronan Hayes.

Donal Burke slotted over his first free of the game after that, and LAois finally opened their account in the tenth minute, as Cha Dwyer scored from 35 yards out. It failed to spark anything in the line of comeback, however, as Dublin hit the next score through another Burke free.

Ross King got Laois' second score, from a free, but Dublin more or less killed the game as a contest in the next few minutes. Fiontán Mac Gib hit a brace of points, Danny Sutcliffe got his first with a nice point from the left wing, and then the opening goal arrived.

Laois only had themselves to blame, as they had the chance to win possession and clear it, only to take too long over the ball. Dublin pounced, and the ball was fed to Ryan O'Dwyer, who beat Enda Rowland with a low shot. Burke added a 65 for Dublin, and they now lead by 1-10 to 0-2 after just 22 minutes.

The home side finally showed signs of life after that, King pointing another free and they then created a goal chance, but Mark Kavanagh's effort was well-saved by Alan Nolan. Dublin added two more before Laois' best spell of the half, as they hit three points in a row from Neil Foyle, Enda Rowland and Cha Dwyer.

It was making little difference to the game as whole, however, and Dublin hit the last three points of the half to see them lead 1-15 to 0-6 at the interval.

Laois gave themselves a glimmer of hope on the restart by hitting the first two points of the half through Ben Conroy and Cha Dwyer, but it was a false dawn. Dublin responded with four in a row to suck what remained of the atmosphere, and competitiveness, out of the game.

To the home team's credit, they kept battling on and a run of five points in a row was by far their best period of the game, with sub PJ Scully hitting 0-6 in the second half. Dublin finished strong though, and corner-forward Ronan Hayes hit two goals in the last ten minutes to claim a comfortable win.