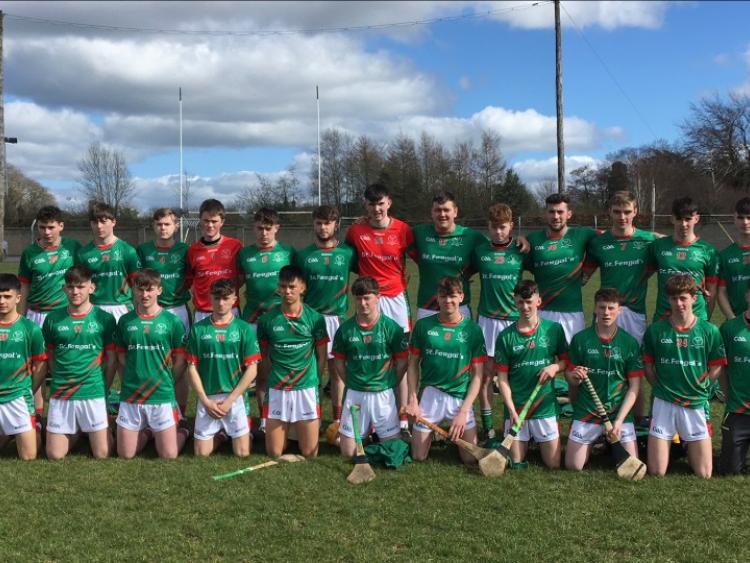 The St Fergal's team which took on Scariff.

St Fergal's saw their dreams of All-Ireland colleges glory come to an end in Toomevara today, as they beaten by a clinical performance from Scariff Community College.

The Rathdowney school had laid siege to the Scariff goalmouth in a frantic late comeback, but they had been left with too much to do by a Scariff forward line which rarely missed on the day.

St Fergal's started brightly, with goalkeeper Cathal Dunne fetching the first three balls sent into their penalty area, and they then took the lead with a point from Adam Loughman in the third minute.

The lead didn't last long, as Scariff's dangerous corner-forward Mark Rodgers pointed a free soon after. St Fergal's were probably shading things at this stage, and they went back in front when centre-back Thep Fitzpatrick launched a long-range free over the bar.

Again Scariff came back, and it was Rogers again who got the equaliser, this time from play with a lovely shot off his left. As seemed to be the pattern of the game now, it was St Fergal's who went back in front, with Loughman floating over a brilliant point from out near the left sideline.

There was little to worry the Laois school at this stage, but Scariff burst to life after that. Their first goal owed much to hesitancy in the Fergal's defence, as they had a number of chances to rise the ball and clear, only to see possession fall for the aforementioned Rogers, and he blasted to the net from close range.

That score stunned St Fergal's, and they were still reeling from it when Scariff got in for their second two minutes later. Rogers was the architect this time, as he picked out Martin Walsh with a clever pass, and his low shot found the net.

St Fergal's needed to settle themselves back down now, and that's what they did, as Chris Rafter (free) and Mark Hennessy pointed in succession to get them back within three points.

However, they were opened up at the back for a third time when Scariff full-forward Ciaran Keenan raced away from his marker on the right wing, advanced on goal, and then sent an unstoppable shot to the top left corner.

Keenan followed that up with a point a few minutes later, and St Fergal's then needed a brilliant save from Cathal Dunne to deny Mark Rogers a fourth Scariff goal. They did finish the half on a positive note though, as Chris Rafter got their six point, and they were down by six at the interval, 3-3 to 0-6.

St Fergal's needed to start the second half brightly and that's exactly what they did, with Evan Hawkes pointing with a little over two minutes played.

However, the Scariff attack had found a route to goal in the first half, and they showed no signs of letting up in the second. They won a penalty in the fourth minute of the half, and centre-forward Michael Hynes tucked it into the bottom corner.

Both teams traded points over the next few minutes before Scariff fashioned the score of the game. They won the ball down the left wing, and midfielder Fionn Slattery picked out Fergus Madden 25 yards out, and he rifled an unstoppable shot into the top left corner.

Three quick-fire points from the Clare school had them 5-9 to 0-10 in front with ten minutes to play, and there wasn't much St Fergal's could do at that stage, not that they were going to throw in the towel.

With the odds stacked against them they kept piling forward, and finally got a reward when Chris Rafter's free snuck over the line. A couple of minutes later, Conor Handcock's shot was headed for the top corner, only for Scariff 'keeper William Kavanagh to make a stunning save.

Undeterred, St Fergal's kept coming, and Rafter got another chance from a 21 yard free, and duly found the back of the net.

With belief returning, St Fergal's laid siege to the Scariff goalmouth for the final minutes of the game, but the closest they came to another goal was when a third Rafter free was deflected over the bar, as Scariff claimed a deserved win in the end.