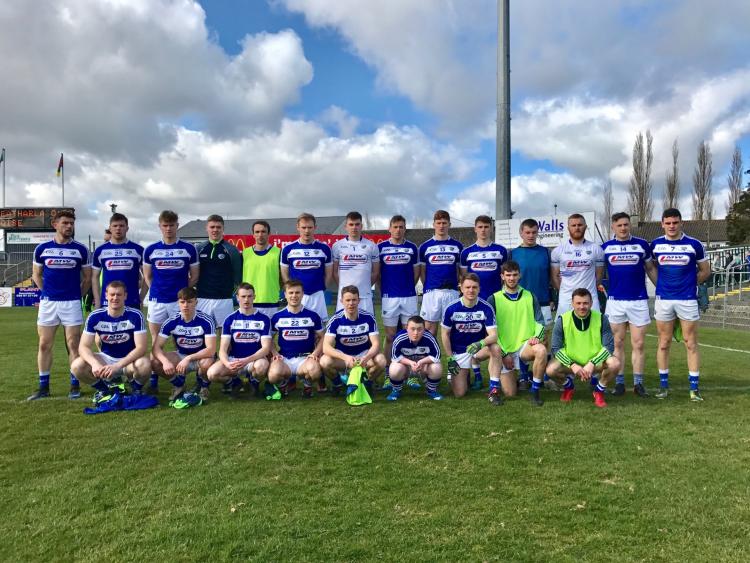 The Laois team with mascot and vice-captain for the day Jack Bolton.

The Laois senior footballers have been promoted to NFL Division 3 after they eked out a one point win over Carlow in Netwatch Cullen Park this afternoon.

Laois scored just one point in the second half, that coming from a Donie Kingston free in the 67th minute, but they managed to hold off a late charge from Carlow to seal the win.

Laois had started brightly, scoring a goal with their first real attack. Laois won possession from the throw in, and Carlow immediately flooded men back into their defence, leaving just one player in the Laois half. No Carlow player touched the ball in the opening two minutes or so of the game, as Laois probed and passed and bided their time, looking for an opening.

When it eventually came, they burst through the Carlow defence and worked the ball to Gary Walsh, who cut onto his right foot and tucked a shot into the bottom corner of the net.

Carlow didn't make a concerted attack on the Laois defence until the fifth minute when they won a free a little inside the 45 yard line, and Paul Broderick slotted the ball over the bar.

Gary Walsh quickly replied for Laois, again from a free after Laois had to wait for an opening to pick their way through the Carlow defence. Donie Kingston then added another point for Laois, as he made space for himself 35 yards out and kicked a lovely score off his left foot.

Broderick was proving to be Carlow's best source of scores, and he added another free after that to leave a goal between the sides after 20 minutes of play.

Laois were playing that bit better, and when they did hold possession and time their passes correctly, they were able to work openings despite Carlow's numbers in defence. Alan Farrell and Gary Walsh (free) pointed in quick succession to push Laois five ahead, their biggest lead of the half, but Carlow came back well.

Again it was through the left boot of Paul Broderick, as he kicked three frees in a row to get Carlow within two. However, the last act of the half came from the right boot of Gary Walsh, as he stroked over a tricky 45 to see Laois 1-5 to 0-5 in front at half time.

The second half started the way most of the first half has been played, as Carlow put 13 men in their own half and Laois had to pass the ball over and back across the field looking for an opening. It was poor fare, and the opening ten minutes of the half failed to yield a score.

Ten minutes turned to twenty, and still we had no score in the half, with the opening score not coming until the 58th minute, when Paul Broderick pointed from play for Carlow. Laois had been reduced to 14 men moments earlier, as Kieran Lillis picked up a second yellow.

Broderick's score made it a two point game, and Carlow could have gone ahead soon after only for Jordan Morrissey's pass to Darragh Foley being overcooked, and a gilt-edged chance for the hosts was wasted.

Broderick then followed up with a brilliant point from a sideline to get Carlow back to within one, and Laois finally got their first score of the half after that when Donie Kingston lofted over a free.

Carlow then narrowed the gap again with a free from Paul Broderick, and that set up an absoluely frantic end to the game, as Carlow searched for an equaliser, but Laois just about managed to hold them out to secure the win.