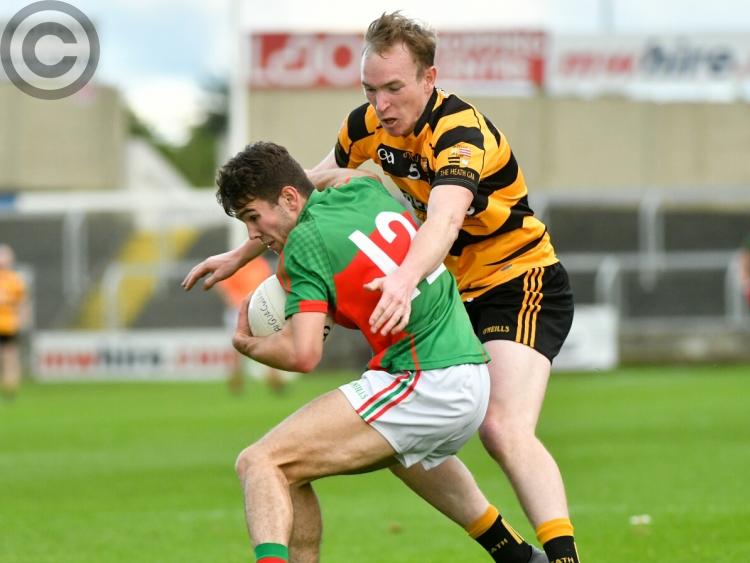 The Heath edged out Graiguecullen by a point this evening.

A late, late point from The Heath substitute Dylan Kavanagh saw the men in black and amber edge out Graiguecullen by the minimum in their league clash on Sunday evening.

Luke Alsybury looked like he had kicked the equaliser for Graiguecullen just as the game ticked into injury time, but The Heath managed one last attack, and Kavanagh cut in from the left wing to score a brilliant winner.

It had been a closely fought encounter from start to finish on The Heath, with never more than two points between the teams in a good opening battle to their respective league seasons.

The Heath drew first blood with a point from Daithi Carroll, but that was quickly canceled out by a point from Graigue's Ross Hennessy. The visitors then went ahead thanks to two very impressive scores, as first Jamie Sheehan, and then Jamie Parr, both landed long-range points.

Graigue looked like they might be about to take control of the game now, but The Heath responded to that brace of points in fine style. A lovely move down the field ended with Aidan Bergin passing to brother Chris, and he made no mistake for the opening goal of the game.

Graiguecullen responded well, as Parr landed his second point from a free, before wing-forward James Doogue chipped in with another as they re-took the lead. As they had done already, however, The Heath fought back with a goal.

This time it was Andrew Booth who applied the finish, as he was set by good work from Denis Booth, and The Heath's corner forward did the rest.

Graiguecullen could have buckled after conceding a second goal, but instead wing-back Martin Doyle got forward to kick a nice point, and then centre-back Chris Hurley went one better. He played a neat one-two with Aaron Forbes before placing a shot to the bottom corner, as Graigue went back in front.

The final score of the half went to The Heath, as PJ Daly slotted over the bar, leaving the visitors ahead by the minimum, 1-6 to 2-2, as the teams headed for the dressing rooms.

Chris Bergin and Jamie Sheehan swapped points on the restart, before The Heath enjoyed their best spell of the game, as they kicked three points in a row. They all came from Daithi Carroll, as he pointed two frees after fouls on Eoin Delaney, before hitting another from play.

Ross Hennessy broke the run of Heath scores with a free, but PJ Daly soon hit back when he pointed after a nice move down the left wing.

Hennessy (free) and Eoin Delaney scored for their respective sides as The Heath clung on to a two point lead, but Graiguecullen finally reeled them in after that. Danny Alsybury got them within one with a point, and then wing back Luke Alsybury got forward to kick the leveler.

The Heath would not be denied, however, as substitute Kavanagh, making his first appearance at this level, cut in from the left wing and sent a wonderful point between the posts.

Graiguecullen got one last chance to get something from the game when they won a long-range free, but Aaron Forbes effort came up short, and The Heath held on for the win.