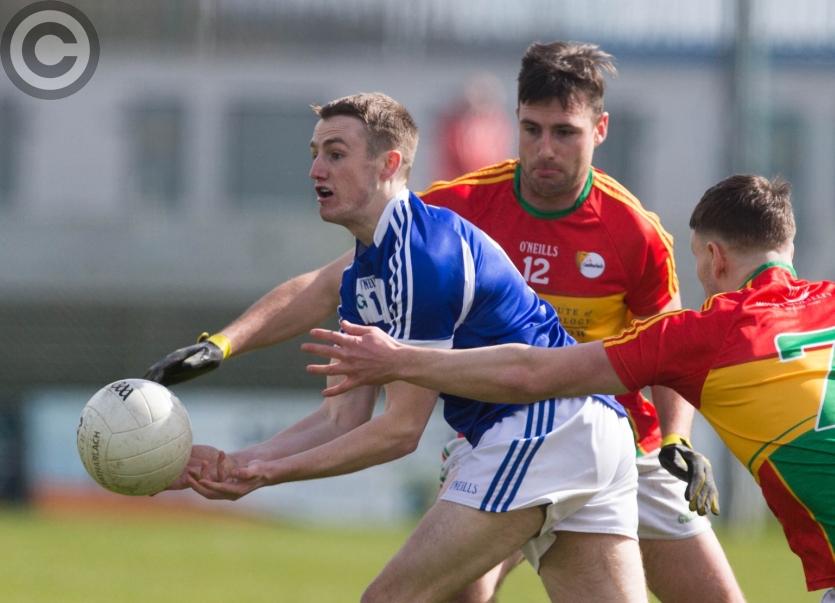 Laois head to Croke Park tomorrow for their first national final since 2011, as they meet Carlow in the NFL Division 4 decider.

Ahead of that game, we take a look at three big talking points to look out for in a unique Croke Park encounter.

Statistics are a key part of modern GAA teams. Everything is analysed now, and more or less every county team are monitored by a coterie of men with laptops, ipads and cameras who track the players every move.

However, no great statistical analysis is needed of last week's game against Carlow to see where the trouble lies for Laois ahead of the re-match. Six of Carlow's eight points came from frees (one came from play, and one from a sideline), so the equation is quite simple - more disciplined tackling will have a major impact on Carlow's scoring threat.

The problem for Laois is that they do not tackle well. This is a problem John Sugrue inherited and it has at least improved from last year, when it was perhaps at its nadir.

In last Sunday's game, however, because Carlow retreated so far, Laois players drifted further forward than they normally would, so when Carlow did turn over possession Laois defenders were not best placed to intervene.

They will have to be mindful this Saturday about getting dragged out of position again and allowing the kind of space and confusion in their back line which Carlow's counterattacks need to be successful.

While Laois got an early goal last week, Carlow had two brilliant chances for goals themselves in the second half, one of which was saved and the other they wasted because of a bad pass.

The warning signs are there for Laois. Carlow may be defensive, but they have shown they can pick their way through this Laois rearguard if the space is there and Laois tackling is not good enough, so they will have to improve on those counts for Saturday.

Murphy may not have had an impact on the scoreboard last weekend, but he did have a big impact on Laois, with two Laois players being forced off the field, in part, because of their attempts to curtail him.

Robert Pigott was substituted with a little over 30 minutes played because he had already picked up a yellow card and was fouling far too often. Most of his fouls were committed on Murphy, as he tried to handle the Carlow midfielder.

One of Kieran Lillis' yellow cards came for a late hit on Murphy early in the second half, and while it may not have been a vintage display from the Rathvilly man, he still had a major impact on the game.

In terms of physicality, John O'Loughlin is Laois' best bet to match him, but O'Loughlin is playing well himself in his own role this year, and is unlikely to be detailed a man-marking job.

Whoever does pick him up will have to be strong enough to stand up to him physically, quick enough to follow him around the field, and disciplined enough not to give away cheap frees to one of Carlow's key players.

On Tuesday, Gary Walsh's participation in this weekend's game wasn't in question, but today it is.

While it has not been confirmed officially by Laois GAA, it is likely Walsh will not play against Carlow on Saturday, following his comments regarding the Belfast rape trial on Twitter on Wednesday.

Laois GAA and their sponsors, MW Hire, were forced into issuing a statement in which they distanced themselves from what he had to say. Walsh's Twitter account now has the MW Hire logo blurred out of his pictures, so there appears to be a concerted effort from all involved to distance the player from the sponsors.

Walsh himself issued an apology, and he drew criticism from across the country over his comments.

It is an unnecessary sideshow for John Sugrue and his management team to deal with. Their goal for the start of the year was to turn Laois' fortunes around, and they have done an excellent job so far in winning games and getting some positivity back into football in Laois.

However, having a player draw national scorn on himself, with people calling for him to be dropped, three days before your biggest game of the year isn't in any coaching manual. Laois will just have to make the decision they feel is best, and move on to the challenge of trying to win a national football league title.