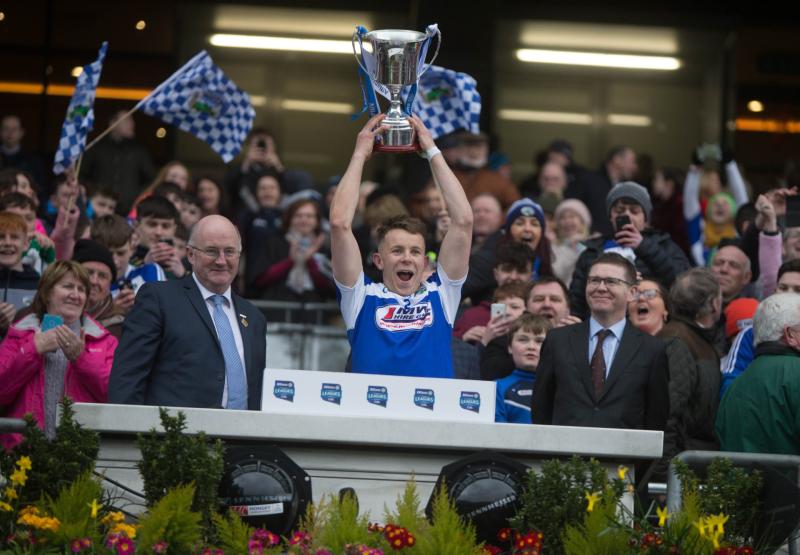 Laois are NFL Division 4 champions after they proved too good for Carlow in Croke Park today.

John Sugrue's charges were by far the better side in headquarters today, and they built up an early lead before holding Carlow at arm's length for the remainder of the game.

After a tumultous week, Laois needed a bright start to settle them into the game, but in a reversal of what happened the week before, Carlow won the throw in and held possession for the first few minutes.

They couldn't fashion a decent scoring chance though, and Laois eventually got up and running. The opening score came from the left boot of Ross Munnelly, as he slotted over a free, and John O'Loughlin soon added another, from play.

Munnelly then kicked a lovely score from the left wing as Laois made all the early running, and Donie Kingston then made it four in a row with a powerful shot from close range which flew over the bar.

The lead soon went to five when Kieran Lillis landed a fine point from range, and everything was going to plan for Laois at that stage.

Carlow didn't open their account until the 17th minute when Darragh Foley put them in front, and Brendan Murphy added a brilliant second for them moments later.

Carlow captain John Murphy then wasted a good goal-scoring opportunity, and Laois made the most of that let off as Donie Kingston and then Munnelly added two more to the tally.

That put five between the teams again, and three more points each before the half time whistle left Laois leading 0-10 to 0-5 at the interval.

It got better for Laois on the resumption of play when Eoin Lowry floated over a free from 45 yards, but Sean Murphy quickly canceled that out for Carlow.

Sean Gannon and Darragh Foley (free) narrowed the gap further for Carlow, although they should have gotten closer as Paul Broderick missed two scoreable frees.

Carlow were building a little momentum now, but a well-worked move from a sideline by Laois ended with Eoin Lowry pointing from 30 yards out. A foul on John O'Loughlin then allowed Ross Munnelly to tap over a free, and Laois were five ahead again, 0-13 to 0-7, after 51 minutes.

Carlow had a great goal chance after that when Brendan Murphy was set up by a poor Laois kickout, but Mark Timmons made a brilliant block. Sean Gannon did get one for Carlow though, as he tapped over a point from 30 yards.

Paul Broderick added another soon after, and Carlow were now back within a score of Laois at 0-13 to 0-10, with eight minutes left to play.

The game was in the balance now, but Laois responded really well. First they won a free which was pointed by Donie Kingston, and then they held possession really well to draw Carlow out of their defensive shape before pointing through Eoin Lowry.

Carlow managed one late point in reply through a Paul Broderick free, but Laois were not to be denied.