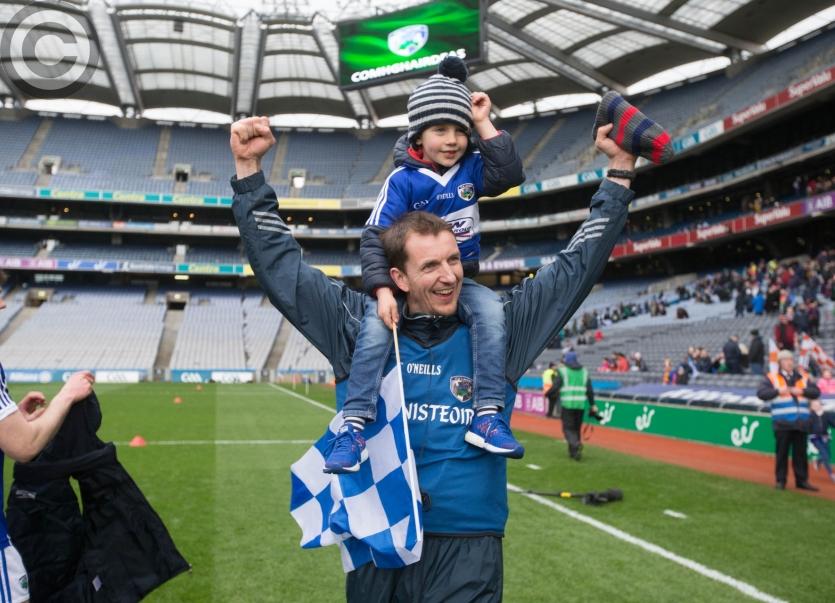 After the most turbulent week of his debut season in charge of the Laois footballers, manager John Sugrue paid tribute to the work rate of his team after they got their hands on the NFL Division 4 title.

Speaking to the media after today's final, the Kerry man paid tribute to the performance of his team today, and the improvements that have made this year. "Yeah, we've tried to be different as a team and as individuals this year, and it was kind of epitomised with the work rate today, lots of fellas out on their feet after putting in a phenomenal work rate. It's a great tribute to the lads how we've knuckled down."

While getting a league title in the bag is a timely boost, Sugrue felt it was just an added bonus to the main goal of promotion. "It's good to come up here and get what we were going after, on today's goals. Last week we got our promotion and this week got our bonus on top of that, so it's good."

It was a difficult lead up to this game for Sugrue and his management team after the fall out from the Gary Walsh debacle, and he addressed the controversy after the game. "These things are unfortunate and they are unnecessary for the team and the individual himself.

"For that, I'd like to say that we apologise for any offence caused, it wasn't intentional on behalf of the Laois footballers, so we'll move on from that now and I thought the lads showed good clarity of thought today, and good focus and good will to win."

There was much debate over whether Walsh deserved to miss the final, and whether that was too great a price for what he tweeted. "The price he paid, people can decide that themselves" said Sugrue.

"We spoke to the team about how we wanted to behave ourselves during the week. It was a breach of that, and they are just the consequences. It's unfortunate. We'll move on."

The Laois team will enjoy this win, but Sugrue is already looking at bigger challenges on the horizon. "We've just got to take stock, we've beaten a reasonably well organised Carlow side, two weekends on the trot.

"It is still Division 4, so let nobody lose sight of that, we've just got out of Division 4, we've won the Division 4 final, it's nice to do it and we'll enjoy it, but we really have to get ourselves back to basics and get back to the grindstone.

"There are a couple of tough weeks ahead, trying to get another gear change if we can out of ourselves, and if we can get that we'll compete hard with Wexford."