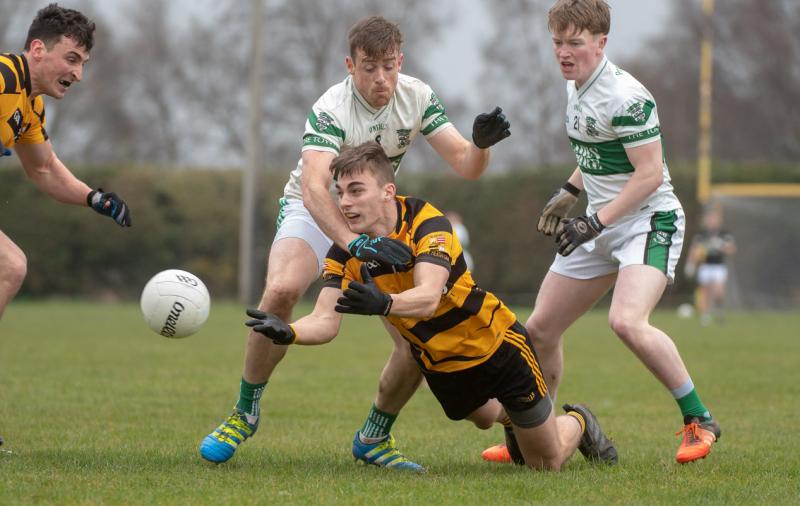 James Phelan gets this pass away for The Heath. Pic: Denis Byrne.

A strong second half from Portlaoise saw them claim a nine-point win over The Heath on Sunday morning in this ACFL Division 1 clash.

A fortuitous goal in the first half had Portlaoise five clear at the break, but the opening period had been evenly contested for the most part. Portlaoise had the benefit of a strong wind at their backs in that half, so with the promise of that to come in the second half, there was reason for The Heath to be cautiously optimistic.

However, Portlaoise moved through the gears after the interval, scoring 1-4 without reply to end the game as a contest. The Heath did manage to finish strongly, but the damage had been done at that stage.

We had to wait almost ten minutes for the opening score of the game, as Portlaoise took the lead thanks to a slice of good fortune. A high ball into The Heath's penalty area slipped from the grasp of Denis Booth, falling kindly for sub John Kavanagh, who swept it to the net.

The Heath responded well, and eventually pieced together a nice move which ended with Robbie Dowling pointing from the left wing. The strength of the wind could be seen in the next two Portlaoise scores, as both Craig Rogers and Gareth Dillon pointed frees from outside the 45, either side of a good score from Ciaran Booth.

The Heath corner-back Alan Whelan then got forward to squeeze a shot over the bar from a tight angle, hit off the outside of his right boot from the right wing, and the hosts were only two down despite facing into the elements.

However, Portlaoise did finish out the half strongly with three points in a row. Dillon and Rogers hit two more frees while Benny Carroll added another, and that put them five ahead at the break.

The second half was dominated by Portlaoise for the most part, as Conor Boyle kicked the first score a little over two minutes after the restart. Colin Finn then got up to blast one over the bar from close range, before another handling error in The Heath's defence, this time from goalkeeper Billy Hennessy, handed Kavanagh another goal.

Hennessy redeemed himself with a brilliant point-blank save from Benny Carroll, but points from Bruno McCormack and Ronan McEvoy had Portlaoise twelve clear, 2-9 to 0-3.

Alan Whelan again got up from defence to kickstart his team's second half challenge, as he pointed from close range, but Portlaoise hit back through Carroll and McEvoy.

It was only now that The Heath got going in the second half, as they went on a run of four points without reply, all of which came from Daithi Carroll. The midfielder hit three frees and one from play, but the revival was too little, too late.