O'Dempsey's claim the bragging rights with derby win over Portarlington 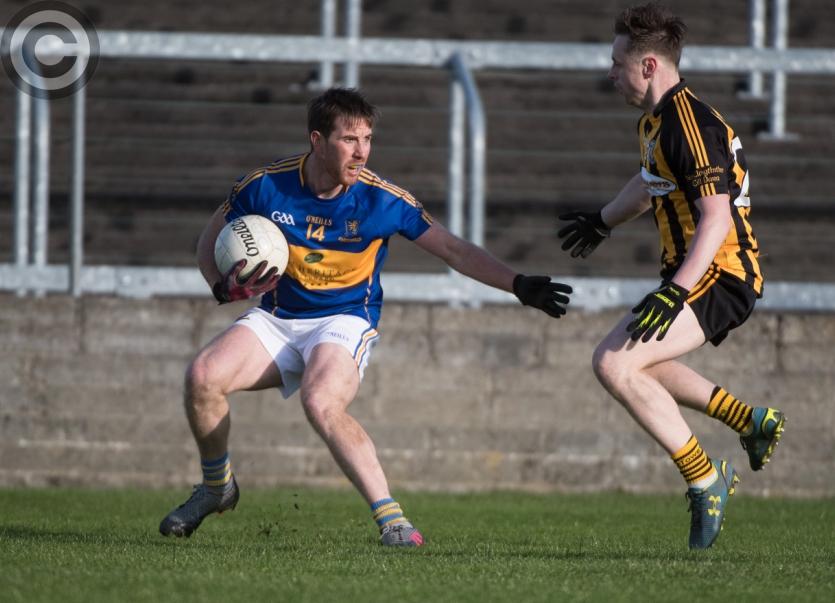 Portarlington and O’Dempsey’s hadn’t played each other at senior level since 2011 before this contest, in a game where O’Dempsey’s came out on top after an entertaining battle on Saturday night in McCann Park.

The Killenard side managed to produce the same result this time around as in that last meeting, as a strong second half meant they picked up their second win of the league campaign.

Portarlington’s Colm Murphy opened the scoring from a placed ball within a minute. O’Dempsey’s replied emphatically though, as Mark Barry found the net. An excellent delivery from Matthew Finlay was met by big full forward Daniel McCormack, who cleverly pushed the ball onto the onrushing Barry, who finished at his ease.

Mark Barry tagged on O’Dempsey’s first point, but the home side responded well. After Colm Murphy’s shot struck the post, it fell to the unmarked Jake Foster, but his shot rattled the crossbar. Ronan Coffey tapped over the rebound, however.

Coffey was involved again in Portarlington’s next point, after he returned the ball to onrushing Colin Slevin, who made a charge up the field and pointed, which was one of the scores of the match.

Mark Barry hit back for O’Dempsey’s, but two Ronan Coffey points, sandwiched between one from Jake Foster, gave Portarlington the lead. The sides went score for score near the end of half, and the score was level at half-time, perfectly set up for the second half.

O’Dempsey’s started the second half brightly, with Barry Kelly and Eoin Finlay finding the target. Ronan Coffey replied with a free, but that was the last score Portarlington would manage for a while, as O’Dempsey’s hit 2-4 without reply to put the game beyond the hosts.

After playing a give and go with Michael Finlay, Barry Kelly’s shot deflected past goalkeeper Sean Mooney for O’Dempsey’s second goal. Eoin Finlay and Rory Bracken continued the scoring, before O’Dempsey’s fired in their third goal of the evening. Matthew Finlay and Tommy Kehoe played several 1-2’s with each other, with Matthew Finlay eventually tapping into an empty net. Mark Barry swung over a further two points to stretch the lead out to eleven.

Portarlington, to their credit, refused to give up. David Murphy pointed his first of the evening, and was awarded the chance to grab his side’s first goal after Michael Tarpey awarded a penalty. He coolly converted, and the same player placed over another point straight after.

Substitute Jason Ward put over a free to reduce the gap to six, but a point from another substitute, Pat Maher, wiped any chance Portarlington had of staging a late comeback.