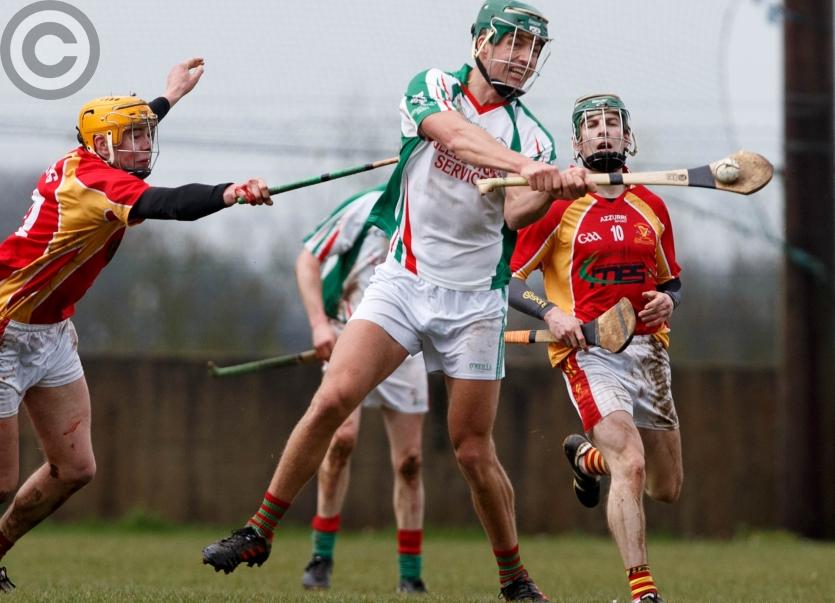 James Ryan shoots for Rathdowney-Errill against The Harps on Sunday. Pic: Alf Harvey.

A late comeback from Rathdowney-Errill saw them snatch a draw against high-flying The Harps in Durrow on Sunday afternoon.

The Harps had come into the game after winning all three of their opening fixtures, and they looked like heading for a fourth when they lead 1-6 to 0-3 early in the second half. However, Rathdowney-Errill managed to steel themselves and despite the conditions, they fashioned enough scores to earn a point.

The Harps had started brightly with points from Michael Lanigan and Pat Walshe, as Rathdowney-Errill had to wait almost ten minutes to register a score through Ross King.

The hosts were enjoying much the better of proceedings in the first half though, and Ciaran Comerford (free), John Brophy and Eoin Clancy all hit the target to stretch their lead out to 0-5 to 0-1 after 18 minutes.

A brace of points from Rathdowney-Errill halved the deficit, but another point from Ciaran Comerford, from a free, ensured that The Harps lead by double scores at half time, 0-6 to 0-3.

The second half proved to be an exciting, albeit at times tempestuous, affair. The Harps got the dream start when John Brophy fired in yet another goal, as his goal-scoring form this year has been outstanding, before a couple of minor melees threatened to derail the game.

Order was eventually restored, and a Rathdowney-Errill point got the scoring back under way.

The strong winds meant both teams really had to earn their scores, and they were also making life difficult for the freetakers, with Michael Lanigan taking over for The Harps and landing what would prove to be their last score, making it 1-7 to 0-5 in the 49th minute.

Rathdowney-Errill needed to rally now if they were going to get something from this game, and that's exactly what they did. They hit the last five points of the game, with Ross King to the fore, as they got the equaliser with two minutes of normal time remaining.

Neither side could fashion an equaliser, and so had to be content with a share of the spoils.