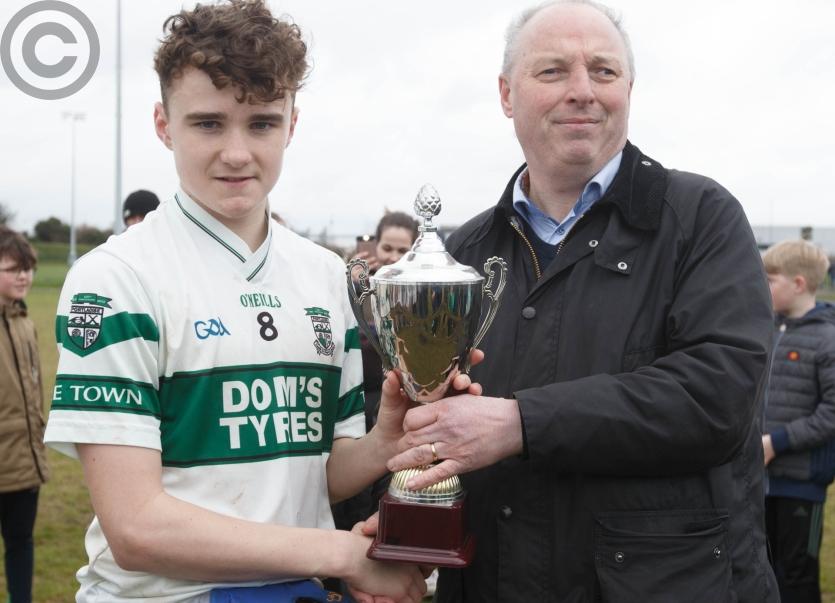 Just like last year, Portlaoise will again represent Laois at the Féile ‘A’ competition, after they proved too strong for Portarlington in the final at the Laois GAA Training Centre.

There was a notable difference in height and physicality between the two teams before throw in, and Portarlington struggled to deal with it from the start.

In the opening minute of the game, a long ball was sent into the square by wing back Dylan Cahill. Lee Smith rose highest to claim the ball, and slotted past Kailyn Flood for the first of Portlaoise’s six goals.

The second goal was scored in a similar fashion, as midfielder Richie Whelan latched onto a high ball, and blasted home, as Portlaoise raced out of the blocks. In fairness, Portlaoise played with a heavy wind advantage in the first half, which meant it was always going to be an uphill battle for Portarlington.

Barry Fitzpatrick, who was superb throughout, placed over Portlaoise’s first point of the day, before grabbing a goal for himself. He used his power to charge through the Portarlington defence and neatly place into the corner past the helpless Kailyn Flood.

Points from Connor Brown and Richie Whelan rounded off the half for Portlaoise as they led on a score line of 3-3 to 0-0.

Portarlington had the wind advantage in the second half, but that couldn’t stop Portlaoise from scoring their fourth goal.

After Kieran O’Donnell’s shot was palmed out by Kailyn Flood, Jamie O’Callaghan followed up to get his first score of the game, coming in the form of a goal. Colin McEvoy placed over a point, before Portlaoise struck for their fifth goal.

Richie Whelan was the goal scorer on this occasion, after he leaped highest to catch the ball, turning, and scoring past Kailyn Flood.

Portarlington never stopped running throughout, with Darragh Slevin causing problems for Portlaoise throughout. However, it just wasn’t their day, as Portlaoise rounded doff the scoring for emphatically. After Conor Raggit’s shot came off the post, Jamie O’Callaghan was once again first to respond to the breaking ball, and made no mistake with the finish.

Substitute Matthew Coonan got in on the scoring act for Portlaoise at the end, as they came out dominant 6-5 to 0-0 winners. They are a very strong and talented team, and they are well capable of winning much more in the near future.