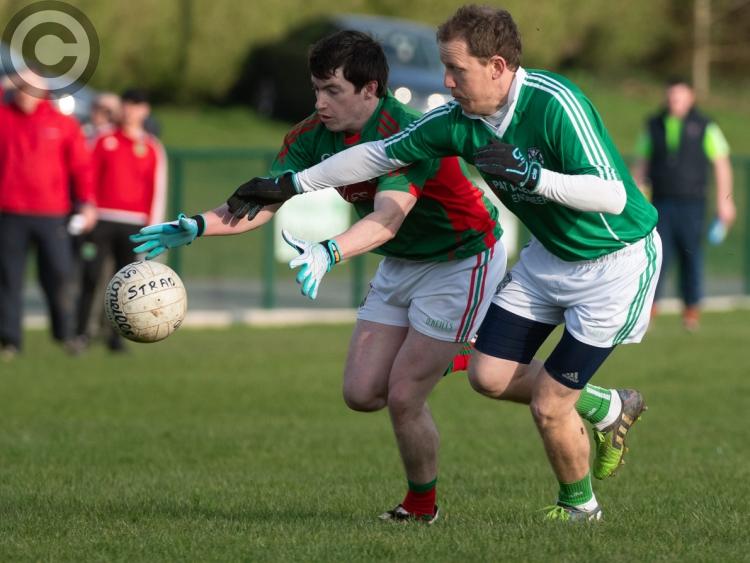 Stradbally picked up their first win in three outings when they dismissed Graiguecullen with thirteen points to spare in Tony Byrne Park on Saturday last.

Stradbally were first off the mark with full-forward, Conor Delaney, pointing in the opening minute after Podge Fitzpatrick’s initial effort blazed off the post. Playing against the wind in the opening half, Stradbally notched two points in a row from Fitzpatrick to put them three ahead with just under a quarter of an hour played.

Jamie Parr set Graiguecullen underway with a free to open their account, but Stradbally replied instantly with a flurry of 1-3 in three minutes to stun Graigue.

Colm Kelly initiated the scoring spree with a short range free, before Podge Fitzpatrick got a flick on Jack Langton’s clever ball across the square to lift the first green flag of the day. Points followed from Tom Shiels and Kelly as Stradbally opened up a 1-6 to 0-1 lead with eighteen minutes elapsed.

Graiguecullen steadied the ship with Ross Hennessy finishing off a brilliant run with a point, before converting a free a minute later. Just as Graiguecullen looked to be finding their footing in the game, Stradbally claimed their second goal of the game.

With twenty-one minutes played, Tom Shiel finished a superb team-goal. A menacing run through the centre by Eoin Buggie saw him feed Jack Deegan who in-turn found Colm Kelly inside before laying off to Shiel who fired low past Ger Kiernan in the Graiguecullen goals.

Graiguecullen dusted themselves down and went on to fire the final four points of the half through Hennessy (2), Jamie Parr and Martin Doyle to see them trail by five points at the interval on a scoreline of 2-6 to 0-7.

Now playing with the breeze behind their backs, Stradbally kicked four points in the opening ten minutes of the second half. Tom Shiel (2), Jack Langton and Podge Fitzpatrick all found their range to increase the Stradbally lead to nine points with twenty minutes remaining.

Jamie Parr and Ross Hennessy combined to see Trevor Collins split the posts on the forty-five minute mark, but Stradbally returned fire with a Shiel point following a 60m dash. Two minutes later Stradbally lifted their third green flag of the day when Darren Maher’s quick free into the box was misjudged by Ger Kiernan and floated over his head and into the net in a somewhat fortunate goal.

The game trailed out with a fine point from Trevor Collins and a return from Jack Deegan as Stradbally finished thirteen point victors.