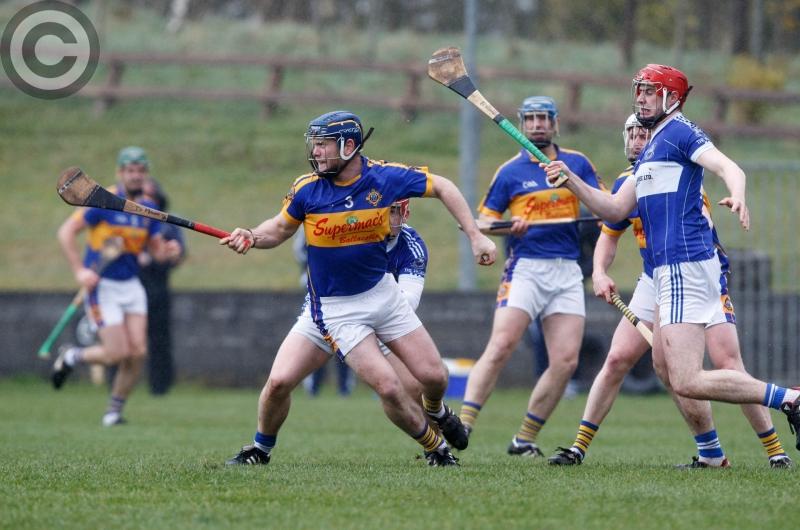 Darren Maher comes out of defence with this ball for Clough-Ballacolla. Pic: Alf Harvey.

Clough-Ballacolla maintained their winning ways as they got the better of Castletown by seven points at home to make it three wins from three outings this season.

With back-to-back wins behind their belts coming into this tie, Clough-Ballacolla looked value for money throughout. With playing conditions less than ideal with soft ground, piercing wind and miserable conditions both sides served up an entertaining contest.

Clough-Ballacolla registered the first point to the scoreboard inside the opening minute as Brian Corby pointed from the throw-in to give them an early lead. Willie Dunphy followed up with a point of his own before Willie Hyland slotted a free to put them three ahead early on.

Shane Phelan hit back with a brace of frees for the visitors and a single from Ryan Mullaney, but Ballacolla continued to find the target as Willie Hyland converted a brace to ensure Ballacolla still led by two approaching the break.

Clough-Ballacolla closed out the half on a high with Steven Bergin and John Dwyer lifting white flags to see them hold a four point lead at the interval on a scoreline of 0-7 to 0-3.

Willie Hyland picked up where he left off to set the second half underway with a brace of frees to extend their lead further, but Castletown hit back with points from Ryan Mullaney and Joe Phelan to keep them in touch.

Clough-Ballacolla went on to fire the next three without reply through Dwyer, Corby and Hyland as they opened up a six point lead approaching the closing stages.

Paddy Mullaney proved influential from placed balls in the final minutes as he landed a long-range free from inside his own half as well as a sixty-five to keep Castletown in the fray.

Clough-Ballacolla closed out the game with a brace of Willie Hyland frees to see them record a seven point victory, leaving them third in the table with six points from six and with a game at hand.