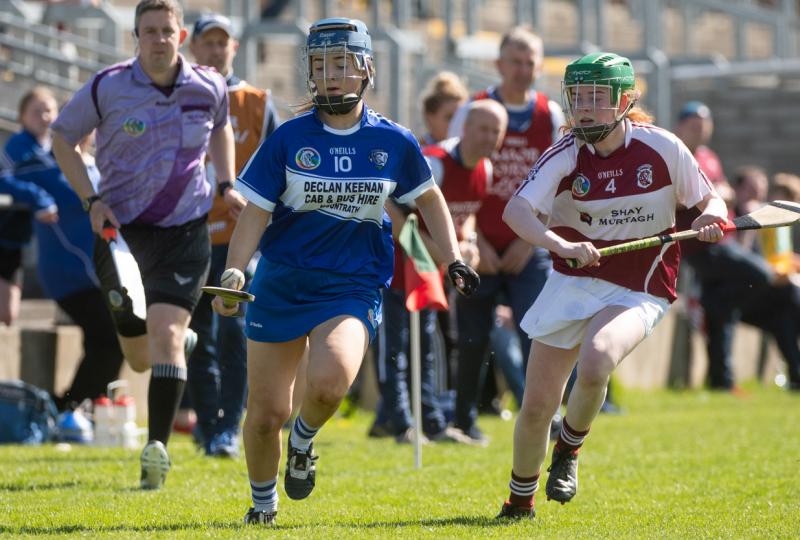 Westmeath shattered Laois’s dreams of making an All-Ireland Minor Final on Saturday in St Brendan's Park, Birr with an eleven-point win over the O’Moore county.

Laois topped their group with wins over Meath, Roscommon, Carlow and Down. Westmeath came second in their group, where Antrim topped and went on to beat Carlow in the other semi-final in Monaghan.

Westmeath manager Jimmy Greville’s side were coming in strong with several of their panel having the experience of playing on their intermediate team during the league, whereas Brendan Lowry’s Laois side consisted mainly of players stepping up from the U-16 All-Ireland winning panel of 2017.

On the day experience showed and credit to the young Laois ladies, they never hung their heads and kept plugging away at the Westmeath team, even when a victory looked out of sight.

Westmeath, on the blow of the whistle, started strongly by sending a ball into the Laois backline. Slow to clear, Laois handed Megan Dowdall the ball to pop over the bar for the opening score. Molly O’Connor had the tough job of marking Dowdall and three minutes in she fouled Dowdall, making it easy for Sheila McGrath to convert the placed ball.

Clodagh Tynan converted a placed ball for Laois from the 65, to get Laois on the scoreboard. Westmeath were settling fast into the game, with the Laois backs ending up being put under severe pressure. Aedin Lowry pulled off some cracking stops on the line with the assistance of Clodagh Tynan to clear down the field.

Twelve minutes in Laois were denied a goal, after Zoe Daly hit the post after receiving a ball in from Tynan. Westmeath went down the field to split the posts with a point from McGrath. Again, Sheila McGrath opened up the Laois defence to gain another point from a hand pass from Hannah Core.

Alice Walsh popped over Laois’s second point from close range after Tynan picked her out from a placed ball. Westmeath cracked on with points, widening the gap between the sides. Ciara O'Looney, McGrath, Ava Balfe and Lucy Power adding their names to the score sheet. The half-time whistle blew with Laois trailing Westmeath 0-11 to 0-2.

Laois came out in the second half nine points down and needed to start strong from the thrown in, if they had any hope of victory. Aimee Collier and Amy Byrne were introduced, and Alanna Tynan from the thrown-in, gained possession, passing on to the newly introduced Collier to slip on to Jones, over the bar for the opening score of the second half.

Westmeath’s Hannah Core ran from the middle of field unchecked to strike for goal, but the quick reacting Lowry denied Core of glory.

A free was awarded which Ciara O’Looney converted. Keenan added points from a '45 in the 41st minute and a free in the 43rd minute but this mountain was still out of reach for the Laois ladies as Westmeath’s Laura Kilcoyne slipped one pass Lowry in goals after receiving a ball in from Core.

Collier added a point from a free, as Westmeath were starting to foul around the backline stopping Laois forwards from gaining access to the goal line. In the last few minutes Laois had a few chances on goal but were denied by the Westmeath backline.

Westmeath added points from O’Looney and McGrath to seal their place in the All-Ireland Minor 'B' Final next Saturday. Laois’s team, starting with goalie Lowry, had a lot to do on the day and credit to her made some cracking stops.

The ever-reliable Clodagh Tynan played out of her skin with the assistance of midfielder Aine Cuddy. The introduction of Amy Byrne held out the Westmeath forwards and will be in contention for a starting place. Aimee Collier returning from injury will hopefully be back to full strength for the Leinster Championship which commences in July.