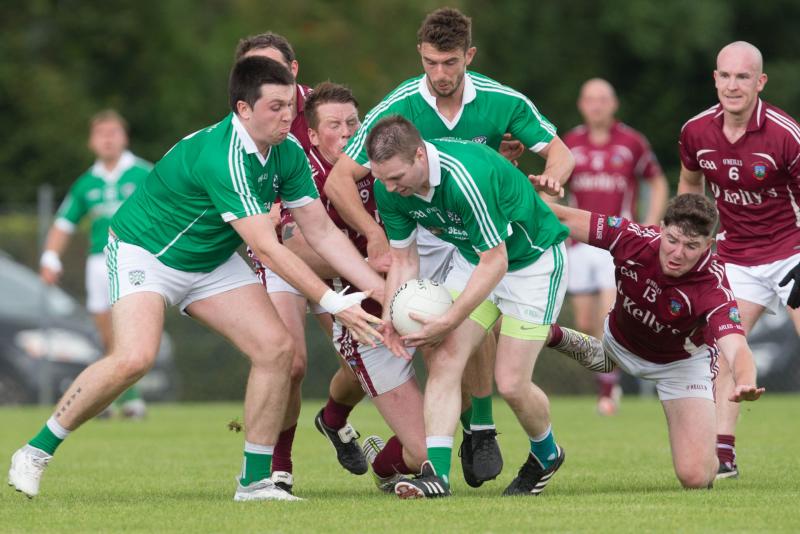 Stradbally made it back-to-back wins.

Stradbally have begun to find their feet in Division 1A after they recorded a hard-earned win over O’Dempsey’s in Killenard.

The result could’ve had a very different look had goalkeeper Wayne Comerford not pulled off numerous stunning saves in a man of the match display.

Tom Shiel replied for Stradbally to level, but O’Dempsey’s went ahead again thanks to a Matthew Finlay free.

Barry Kelly then landed one of the points of the game, after a brilliant catch and long range effort. However, Stradbally hit 1-3 to take the lead. Points from Tom Shiel and Conor Delaney were followed by the first of Stradbally’s three goals. A defensive mistake from O’Dempsey’s allowed Conor Delaney to tap into an empty net. Damian Murphy got in on the scoring act as well.

Eoin Finlay and Colm Kelly (free) swapped points, before O’Dempsey’s hit back with a goal of the own. Matthew Finlay shot was flicked in by Eoin Finlay, as he brought his tally to 1-2 in the first half. Conor Meredith levelled the game, but Stradbally ended the half with a brilliant goal.

Tom Shiel played a lovely pass into Conor Delaney, and he volleyed it past Padraig Bannon to give Stradbally a 2-7 to 1-7 lead at half-time.

O’Dempsey’s started the second half brightly, with Matthew Finlay and Rory Bracken pointing for the home side. Colm Kelly placed over a free, before Wayne Comerford pulled off the first of his string of saves, denying Daniel McCormack.

Conor Meredith put over a beautiful score, after taking on a number of Stradbally defenders, and curling one from distance. Tom Shiel replied with a free for Stradbally, before Mark Barry’s effort was expertly saved by Comerford.

Matthew Finlay pointed for O’Dempsey’s, after Mark Barry was again denied by Comerford, who got down low to save. Stephen O’Leary placed over a free to level the game. Michael Finlay was then denied by the unbeatable Comerford, but O’Dempsey’s pressure seemed to pay off when Rory Bracken put them into the lead.

However, Stradbally went up the other end to score their third goal. Colm Kelly’s shot came off the post, and into the arms of unmarked Padraig Fitzpatrick, who dispatched past Padraig Bannon for the winning score.