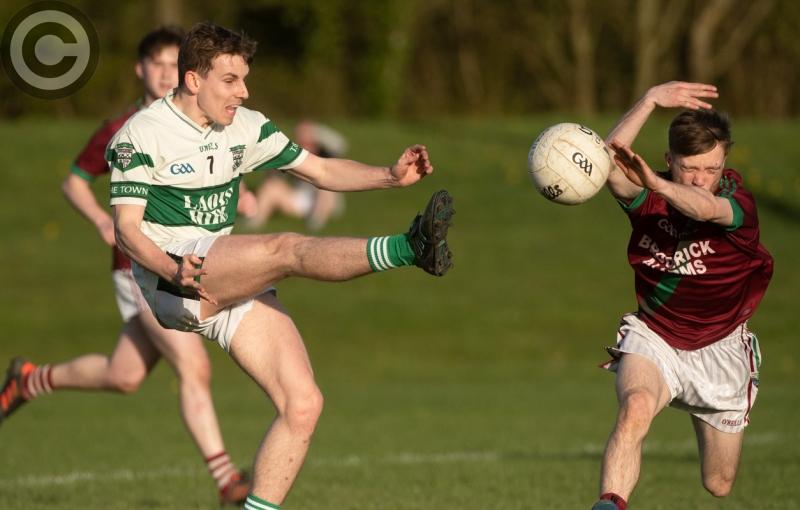 Portlaoise romped to a facile nineteen point victory over Portarlington on Saturday evening in Rathleague.

While neither side were quite at full strength, they were still bolstered by the addition of their respective inter-county players for this clash.

Portarlington played with the aid of the stiff breeze in the opening half, and trailed Portlaoise by five points at the interval before The Town pressed on in the closing half.

Portarlington opened the scoring when Ronan Coffey pounced on the loose ball before splitting the posts to set the sides underway. Portlaoise responded with three points on the hop through Conor Boyle, Gareth Dillon and full-forward, John Kavanagh, to see them take a lead they would hold through to the final whistle.

Adam Ryan and Ronan Coffey exchanged points with Cahillane and Boyle, before Portlaoise fired their first major of the evening through Cahillane on the quarter of an hour mark.

The half closed out with Chris Finn, Cahillane and Kieran Lillis all pointing for the home side, while Coffey, Ryan and Colm Murphy all pointed for the visitors as they trailed by five points at the break on a scoreline of 1-8 to 0-6.

Thirty seconds after the restart, Conor Boyle sent over his third point of the evening - and that was a marker for what was to come for the half ahead. Colin Finn tacked on another a minute later, before half-time substitute Bruno McCormack made an instant impact. On the pitch a mere two minutes, Bruno combined with Jason Maher to see the veteran slot Portlaoise’s second goal of the evening.

Five minutes later, Boyle and Dillon played a clever one-two to see the latter place the ball into the top corner from point blank range. Substitute Dean Lynch added a point shortly after as Portlaoise outscored the opposition by 2-3 to 0-0 in the third quarter.

Portarlington reopened their account twenty minutes into the second half with Jake Foster firing a nice reply, but Portlaoise rattled off a further four points through Ronan McEvoy, Finn, Dillon and Boyle heading into the final five minutes.

Coffey pointed his fourth, and Port’s final point of the day three minutes from time, but there was still time for Bruno to slot his second goal of the half as Portlaoise ran out comfortable victors.