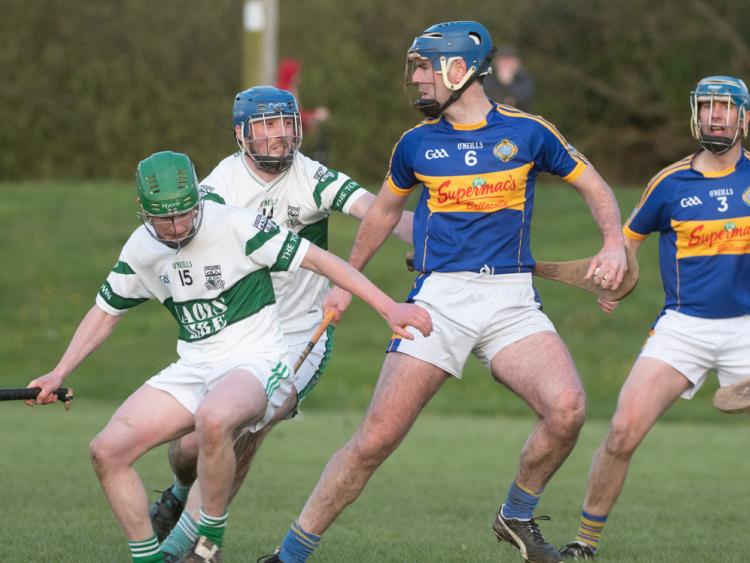 Clough-Ballacolla maintained their perfect start to the League as they made its four wins from four following their seven point victory over Portlaoise in Rathleague on Saturday evening.

This fixture pitted two sides with starkly differing starts to the campaign – Clough-Ballacolla winning all of their opening four fixtures beating Borris-Kilcotton, Abbeyleix, Castletown and now Portlaoise along the way as they sit pretty at the top of the table.

Portlaoise on the other hand sit bottom of the table along side Castletown and Abbeyleix on zero points but behind on points-difference having lost to Rathdowney-Errill, The Harps and Borris-Kilcotton.

The opening half proved to be a relatively high-scoring thirty minutes of hurling. Clough-Ballacolla gave Portlaoise a steep hill to climb from the throw-in, with Willie Hyland firing not one, but two goals inside the opening five minutes as Ballacolla stamped their authority on the game ahead.

Aaron Bergin started the Portlaoise ball rolling with a brace of frees to settle them into the game. Hyland any Corby rattled off points to keep them on top, before corner-forward Ciaran Finane hit 1-1 to ensure Ballacolla kept control of the game.

Portlaoise kept in touch through the accuracy of placed balls from Bergin, but Jordan Walshe was on hand to keep the Ballacolla lead healthy. Heading into the final ten minutes of the half Portlaoise began to break down the Ballacolla defence, resulting in five points without reply.

Aaron Bergin pitched in with three points from play, while Ciaran McEvoy and James Nerney registered singles to close the gap to four points going in at the interval on a scoreline of 3-6 to 0-11.

Directly from the restart, Portlaoise carried their momentum from before half-time forward as they hit the Clough-Ballacolla crossbar twice in the space of seconds. Keith Murphy watched on as his initial effort came back off the upright, as did James Nerney from point blank range seconds later before Danny Hanlon cleared his line.

Clough-Ballacolla replied through Hyland (2) and Walshe to swing the momentum and restore their lead to seven points, but Portlaoise closed the gap to five with a brace from Bergin – one from play and a free – to keep them within touch.

Clough-Ballacolla commanded the proceedings from here and hit the home side for 1-6 on the bounce through Sean Corby (1-1), Shane Hanlon and Shane Hyland to cement their lead. Aaron Bergin goaled late on from a close-range free to bring his personal tally to 1-12 for the day, but it was the visitors, Clough-Ballacolla, that came out on top at the final whistle with seven points to spare.