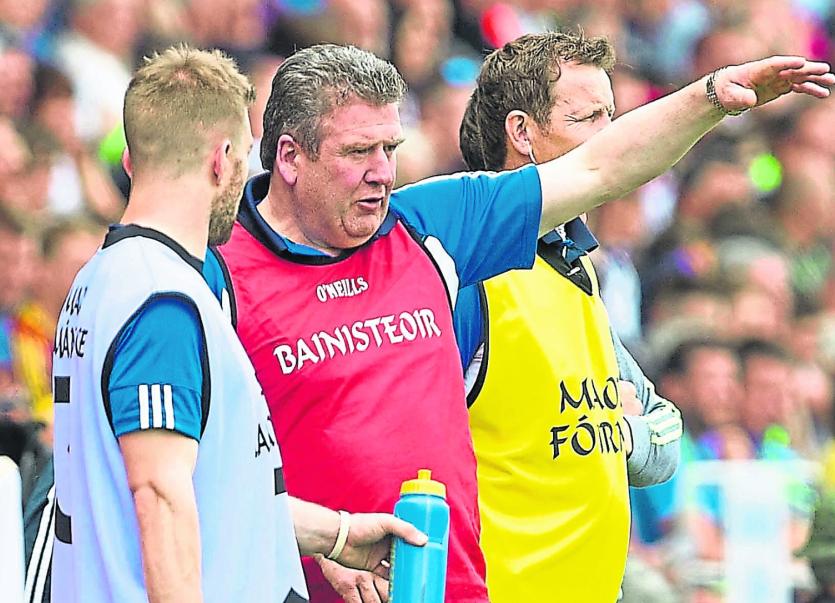 Eamonn Kelly embarks on a second season in charge of the Laois senior hurlers, and he does so with a chance rarely afforded to a Laois manager.

Laois could, conceivably, be contesting a final in Croke Park later this summer, if results go their way. The Joe McDonagh Cup has divided opinion since its inception, but the opportunity is very real for Laois and the other five counties in the competition.

In an ideal world, Laois would be in the Leinster championship, but Kelly was fimly focussed on the competition ahead of him, rather than the troubled nature of its inception. "We are really looking forward to it. We can't drive the car through the rear-view mirror, you can only look at what is ahead of us.

"The Joe McDonagh Cup – We're in a competition where, if we're good enough, if we hurl to our potential, we have a chance of getting to play on the big stage, and that is all it is, is a chance. It's up to us the make the best of that opportunity.

"A lot of lads are putting in a huge effort, doing as much as any other top tier county, in terms of preparation and effort, and they might never have got to play in Croke Park.

"Now is the opportunity, for the likes of Roddy it probably would be a dream come true to walk up the steps of the Hogan Stand to receive a bit of silverware in front of a decent crowd.

"They are the stages you want play on, and the winner of that gets into the Leinster championship next year and the two that contest the final get to play in an All-Ireland preliminary quarter-final. There's an awful lot to play for.

"They're all big games, because when you look at the teams in the Joe McDonagh Cup, any two I believe could be in the final. Like Westmeath, Carlow turned them over, you've Antrim, Kerry, Meath, any of the six could end up in the final. I think there will be an awful lot of those teams beating each other."

With so little time between games, it puts an onus on the Laois management to have their homework done before the competition starts, as there will be very little time for problems to be addressed once things get underway.

It is a scenario which Kelly acknowledges. "It's really just rehabbing and keeping it fresh when you're going week-on-week, there are five games in six weeks, and for a lot of the players it will be six games in six weeks because of the U-21.

"The one bit of a gap is when the U-21 championship is on, so it will be thick and fast. The biggest thing for us is, the lads have put in a massive effort this year coming in early in terms of preparation, and we didn't compromise that, we kept the full month of October and November doing conditioning work.

"Last year from our first game in the championship to the last game against Dublin, we were down eight players, and if that happens us again we won't be in a position to get to Croke Park, so it's all about trying to mind ourselves going week on week."

While preparation is key ahead of the forthcoming schedule, it has been that bit harder to prepare to the best of their ability, as April has now been ringfenced as a month for clubs. Laois senior hurlers have played four league games with their clubs in April, meaning less time to be with the Laois setup.

It's not the perfect scenario, but Kelly was just trying to take the positives from the fact his players were getting games. "It's a double edged sword. It's difficult because you train twice a week and you're losing a night, and losing a chance to play a game.

"The other side of it is it's fine when we're playing league games, we have a panel of 34, you have maybe 18 guys who are getting a game. The good thing about the clubs is that everyone is getting a game.

"Players are in better form when they are hurling, that's the good side of it. I can see the morale is a lot better because the lads have been hurling with their clubs. There is a fear of injury, but we didn't fare too bad."

One of the obvious benefits of the new format will be that Laois are well-versed in this round-robin style format. Between the league and Leinster SHC preliminary competitions, they have plenty of experience in playing games with a quick turnaround period between them.

They will be trying to avoid the form they showed towards the back end of this year's league, however, when their form deserted them and they lost to Offaly and Dublin. "Offaly and Dublin were frustrating, I suppose, particularly with so called, perceived higher graded teams like Limerick and Galway, we would have liked to have been more competitive than we were, in particular against Offaly because of local rivalry and we turned them over last year, so we knew they were going to come with all guns blazing but, to be honest, I thought the scoreline was generous that day. We should have been beaten by more.

"We were flat but, to be fair to the lads, we went up to Antrim, it's not an easy place to go to try and get a result. We showed a lot of character that day. We finished on a good note and hopefully we can push on."

That game in Antrim will hopefully serve as a reference point for Laois, a moment in the season where they dug in and ground out a result despite their dip in form and being away from home.

They will have to draw on it again soon too, because they head back up north for a third meeting with Antrim in a few weeks time. "Any team that goes up there – Dublin went up there and were steeped to get away with a one point win.

"So it's going to be difficult to go back up there trying to beat them three times in ten weeks. The stakes get higher all the time and they're taking us up to Cushendall this time, the next stop is Scotland, so it's going to be very, very tough."

What would make all these trips around the country for the Joe McDonagh Cup that bit easier would be having a full panel available to him, but Laois have unfortunately been hit with a number of withdrawals from the panel this year.

It is something a county of our size can hardly afford, but Kelly is happy with the players who have put in such massive effort this year, and is hopeful the Joe McDonagh Cup will provide reason enough for others to commit in the future. "It is what it is. In Tipperary and in Galway and Kilkenny a fella will go on his hands and knees to training because he knows he has a chance of getting to the first week in September - or the last week in August as it is now - and that's not here.

"But the likes of the Joe McDonagh. If we can get a good run here and get to Croke Park and get the exposure, that might whet the appetite for lads to come back, because it is quite difficult.

"Like, we're trying to hang on in 1B. Realistically we know we're not going to win Division 1 in the league. We're hanging in there and trying to box at a level that's quite high. I think the Joe McDonagh might be the way to get these guys back. They have to want it.

"The one thing I won't be doing is chasing lads around the place. I'm not trying to sound arrogant about that but I have to respect the lads that want to be here. Because they're the fellas that are going to stand up and fight when your backs are to the wall."

Should Laois see everything go as they would hope and they qualify for the final of the Joe McDonagh Cup, then they will have earned themselves the chance to enter the All-Ireland series proper in the qualifier stages.

This new format was designed to help counties like Laois to bridge the gap to the top tier teams in the country. But, does Eamonn Kelly feel bridging that gap is a realistic achievement for county's like Laois?

"If everybody was available to you and put in the effort the lads here are putting in then possibly. That will be answered if we get to the final of the Joe McDonagh Cup. I think there is definitely a big gap between the top nine and the rest. But I think we're working towards narrowing that. Whether we can get on a par with them, I don't know.

"You look at that Galway game in the league? We probably should have taken them that night. Now, you can say that Galway probably didn't have an awful lot done but James Ryan was sent off in error. A lot of ifs and buts. They have a bigger pick available.

"I think you'll see a merging of all the bigger teams in the round robin. We saw it last year. We played that system that all the counties in Munster and Leinster will play this year. Their panels will be tested and that's where we might struggle with the strength in depth. We have very good guys but you're probably going to need 25 guys that are capable of stepping across the line on any given day and being very competitive at the top.

"By bringing in these younger fellas into a professional setup. By giving the exposure to these guys to this set up, that's an investment and that might bridge the gap to the top table."

Laois begin that noble journey with a tricky date against Westmeath this Saturday afternoon.