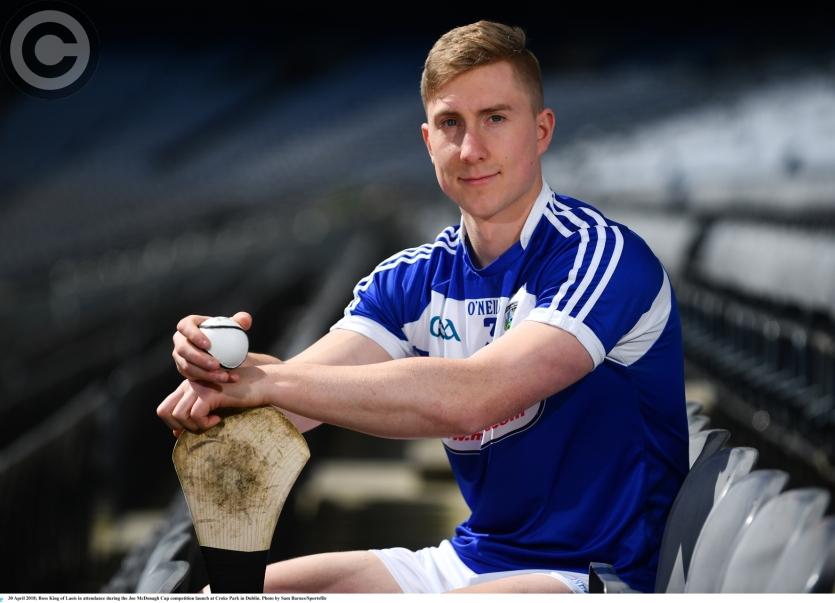 An intense six weeks awaits Ross King and his Laois team mates in the Joe McDonagh Cup, but the Rathdowney-Errill man could be forgiven if his mind wanders every now and again.

As captain of this Laois team, he has that rare opportunity of leading a Laois hurling team out onto the hallowed sod of Croke Park. Visits for the hurlers to headquarters are about as rare as papal visits, but this year offers a good chance.

An awful lot of hurling will take place before Laois can even put themselves in a good position to book a date in Croker, but King admits the thought of doing that has helped him, and his team mates, through a long, tough winter. “Yeah, since we knew about this competition six months ago, it's probably in the back of your mind through the slogging in winter and even the last few weeks, during the last week there was few heavy sessions, and in the back of my mind, and I'd say it's the same for Foyler (Neil Foyle, also present at the interview), we're just craving to get up there.

“Just getting to Croke Park is something I've never done, and it's something Foyler hasn't done it either, and he's hurling with Laois nearly ten years now, and I think it would be just reward for the work that we have put in, not just this year but over the last number of years, and every team will be thinking the same. An absolute dream it would be, yeah.”

The route to Croker is paved with pitfalls, as King knows all too well. “As Eamonn is after saying, it's five games in six weeks, there's going to be injuries, suspensions, loss of form, it's going to be a crazy six weeks to be honest, but we're waiting for it for the last six months, so just bring it on.

“I feel good, a lot of the lads feel good about it, we're confident going into it, we're in good shape, physically and mentally, we're fresh and we're eager to get going.”

The preparations have gone well so far, but the new system of allowing players back to the clubs for the month April has been a new challenge to navigate. For management, it means one less session a week, but King has welcomed the break from the intensity of the intercounty schedule, even if the club games brough their own challenges.

“We've had three games in a row and I'd say I've never been as sore after club games, they were harder than county games, some of them, from a physicality point of view.

“That was a great little break, it refreshes your brain because it's very intense with the county, for a lot of the year your mind is consumed, completely consumed, by getting ready for training, getting ready for eating and drinking water and with matches, you're constantly minding yourself, getting to bed early, or at least that's all the things I tell Eamonn I'm doing!

“After a while you need a bit of a break and the club is the perfect release for it, I'm fresh and ready to go again, and I'm sure Foyler and everyone else is the same.”

Now that King and Co are back into the swing of things with the county, it is another run of games in quick succession. Having gone from regular game sin the league, to regular games with their club, and now more regular games with Laois, King admits the schedule is exactly what the players want.

“Since the Walsh Cup started we've been playing regularly. As a player, when you're training in a block of four, six or eight weeks, it's torture, it's something no one wants because it just gives Eamonn and the boys a bigger chance to fecking flog us around the field!

“All you want is games and we've gotten a good few games, form dips and form rises but it probably makes the journey that bit more enjoyable. We're in another big block now of five or six weeks, and I just can't wait for it to get started and hopefully it starts well.

“We have two games in two weeks and then we have a break, and then we're back into a block of three (games), so with a bit of luck, and we'll target the first game obviously, hopefully the thing goes well and all this effort will pay off.”